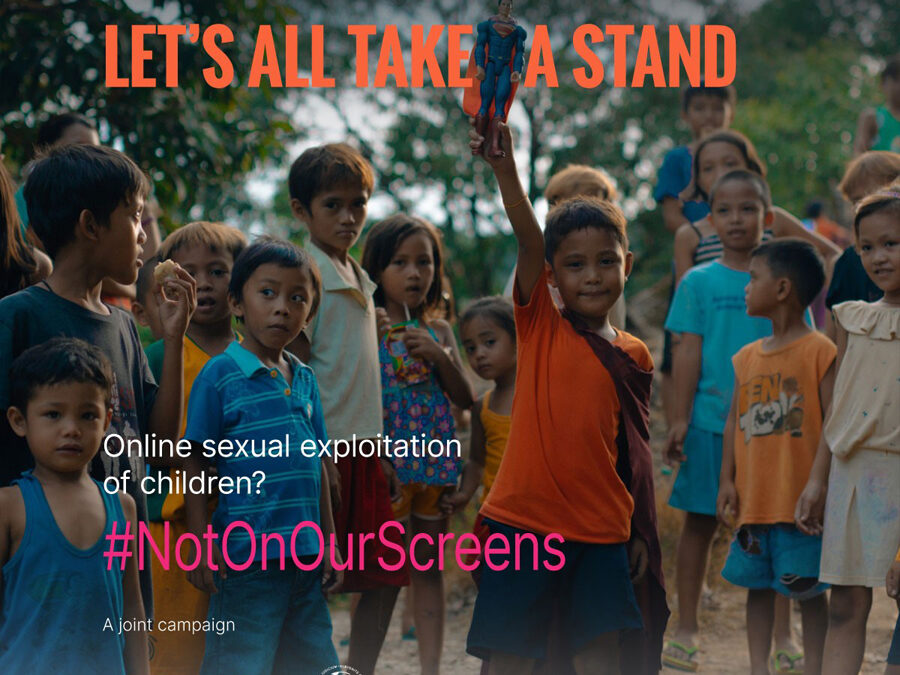 On Safer Internet Day, public urged to take a stand vs. online sexual exploitation of children

MANILA, PHILIPPINES—As the world observes Safer Internet Day, partners in the movement to end the online sexual exploitation of children celebrate wins achieved over the years while calling for stronger community resolve against the continuing threat.

Dubbed #NotOnOurScreens, the campaign aims to cultivate a culture of vigilance against the trafficking of Filipino children through the creation and propagation of child sexual exploitation material (CSEM). Influential TikTok creators participated in the campaign by posting informational videos and directing users to PNP-WCPC hotlines.

“The online sexual exploitation of children is the worst form of trafficking today. It is unfortunate that the internet is being used by unscrupulous individuals in this wrong and illegal way. Thankfully, we have held several perpetrators accountable – at least 138 of them already serving their respective sentences, including life imprisonment. But we cannot rest on our laurels, especially with the surge of this crime during the pandemic. More than ever, there is a greater need now to stay alert against this crime. We at IACAT call on the public to help fight this crime by reporting it to authorities,” said DOJ-IACAT Undersecretary-in-Charge Emmeline Aglipay-Villar.

Ever since Philippine authorities got wind of this modern form of child trafficking, more than 300 perpetrators have been arrested and close to 900 victims have been rescued as a result of the Philippine government’s relentless campaign to end online sexual exploitation of children, including numerous successful anti-TIP (Trafficking In-Person) operations conducted by the PNP-WCPC. The WCPC is a specialized unit of the PNP working against online sexual exploitation of children which is a trafficking offense in the Philippines.

The WCPC also runs a 24-hour Facebook page helpline, dubbed as “AlengPulis”, where people can report online sexual exploitation of children and other incidents of abuse and exploitation of women and children.

The government, through the Department of Justice, has also scored at least 138 convictions, based on IJM-supported operations as of Dec. 31, 2021.

“PLDT and Smart support the IJM and the Philippine government in their efforts to continuously broaden the coalition against online sexual exploitation of Filipino children. As cases of this crime soared through the pandemic, we were able to block access to an accumulation of over 179,000 URLs linked to online child abuse through our network-embedded Child Protection Platform, as of January 31, 2022. Driven by our pioneering Child Safeguarding Policy, we have also rolled out child online safety education to over 37,000 stakeholders and implemented capacity-building interventions for barangay councils for the protection of children in most affected areas,” said PLDT and Smart First Vice President and Group Head for Corporate Communications Cathy L. Yap-Yang.

“IJM is honored to convene key partners for this campaign as we raise our collective voice against the online sexual exploitation children, today’s most urgent crime occurring on the internet. We at IJM are committed to support the PNP-WCPC and DOJ-IACAT in bringing victims to safety, in holding their traffickers accountable and in sustaining the fight until all children are free. We are also delighted to work alongside one of the world’s largest social media platforms, TikTok, and the country’s largest telecommunication company, PLDT and Smart, in making the internet safer for every Filipino child,” said Atty. Samson Inocencio Jr., Regional Vice President of IJM Programs Against Online Sexual Exploitation of Children.

To deepen public understanding of the crime, IJM worked with lawyer and TikTok creator, Atty. Cherie Maryse Alcantara, who created and posted videos about the nature of online sexual exploitation of children and its legal consequences for perpetrators.

IJM also tapped Jan Abigail Maravilla, a TikTok creator known for her educational tech-related videos, for content underscoring the critical role of tech and financial sector in the detection, disruption, and prevention of livestreamed child sexual exploitation. Only 22% of surveyed companies used classifiers to detect livestreamed child sexual abuse, according to the Global Threat Assessment 2021, released by WeProtect Global Alliance and supported by IJM’s Center to End Online Sexual Exploitation of Children.

This is the second time IJM collaborated with TikTok for a grassroots awareness campaign. In August 2021, IJM and TikTok launched the #Report2Protect campaign, which aimed to increase community reporting of online sexual exploitation of children.

Campaign videos are posted on IJM Philippines’ TikTok channel (@ijmph). To view all campaign videos, search for content under the #NotOnOurScreens hashtag on TikTok.

Anyone who has information about an incidence of online sexual exploitation of children is encouraged to report it immediately via these PNP-WCPC hotlines: 0919-777-7377 (Smart) and 0966-725-5961 (Globe).

Kaspersky: Almost 1 in 3 “seniors” in SEA gets anxious when making online payments

Win P5,000 cash plus get a cashback when you Park, Shop, Dine, and Play at SM malls!