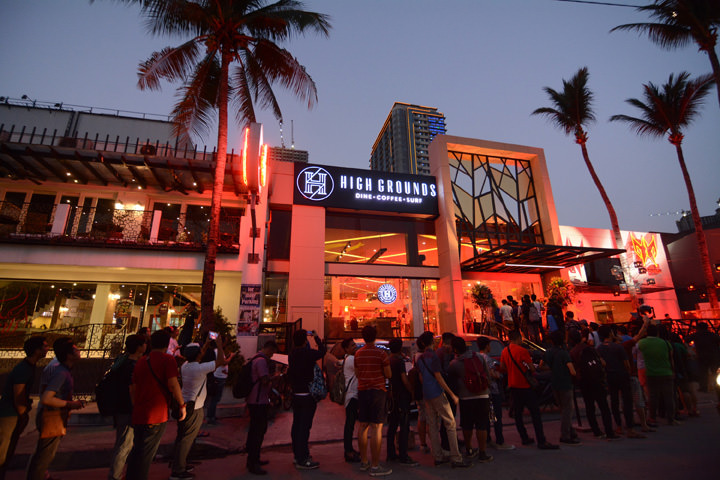 8 February 2017— Global gaming PC brand Predator continues to overpower the competition in the local gaming PC market with the opening today of High Grounds Café, the country’s first and only fully branded gaming café. Operated by the country’s top gaming café brand TheNet.com (TNC), High Grounds Café will definitely capture the attention of both gaming enthusiasts and professionals alike. It is fully armed to the teeth with top-of-the-line and powerful Predator gaming PCs in a gaming environment that’s unlike any other in the country today.

Located amid this city’s entertainment capital, High Grounds Café featured only the best gaming desktops courtesy of Predator, with 110 units of the Predator G1 (GTX 1080) and Predator G3 (GTX 1060) on hand for hours and hours of playing. 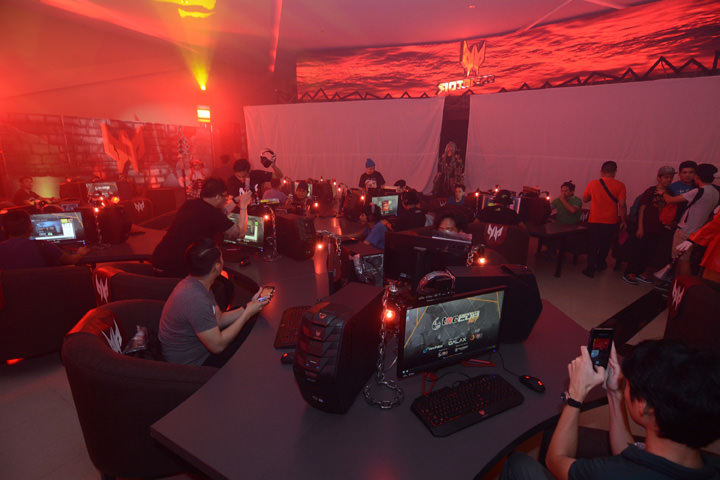 The Predator G1 squeals with beastly bravado that suits today’s brawny gamers with its ultra-powerful Intel Core™ i7 6700 processor (8M Cache, up to 4.00GHz) inside and 32GB DDR4 2133MHz memory for enough show and swagger and truly rock the house with its fiery performance regardless of gaming title while the 3TB 3.5-inch 7200 RPM and 256 GB M.2 2280 Solid State Drive combination is a force to reckon with in terms of storage capability. For visual clarity that lets you get your head—and eyes—into the game, trust the NVIDIA® GeForce® GTX 1080 with 8GB of GDDR5 graphics card to deliver the goods when it comes to an awesome and immersive game experience.

The Predator G3, meanwhile, boasts of the same overclocked Intel i7 processor for that ferocious roar in every game, powerful 16GB DDR4 2133MHz memory and 2TB 3.5-inch and 128GB Solid State Drive combination for the utmost in storage capacity and NVIDIA® GeForce® GTX 1060 with 3GB GDDR5 graphics card that lets you stun your enemies with out-of-this-world graphics and dominate the esports scene.

Pair these two gaming monsters with the 24-inch full HD Predator XB241H monitors that support NVIDIA G sync technology to boost your game day with its no-tear and less-stutter performance for fast-paced games and ferocious visuals that will certainly stun any onlooker.

Thus, expect screams, shrieks of delight in conquest and supremacy to rock the High Grounds Cafe as hundreds of players can be accommodated there at any given time. Gamers can also enjoy glorious snacks and other meal-time favorites during breaks from their game triumphs so they can recharge their batteries and be ready to dominate the competition again.

The opening of High Grounds Café is also the perfect battleground for the launch of the Predator 21 X which gives gaming pros and tech enthusiasts the best and most fearsome gaming laptop ever. Targeting the well-heeled and loaded tech lovers out there who will spare no peso in getting the most advanced and powerful gaming rig around, the Predator 21 X is a perfect fit for gamers who seek a whole new level of immersion in terms of sound and visuals, interaction, cooling and power efficiency never seen before in any gaming laptop.

The Predator 21 X is a humongous beast of a laptop that comes with a robust 21-inch-wide FHD (2560 x 1080) IPS screen with 2000R curvature for unbelievable visuals, 7th Generation Intel Core™ i7 processor, NVIDIA® GeForce® GTX 1080 SLI with 16GB GDDR5X graphics card coupled with 64GB of DDR4 system memory, plus Acer ColorBlast™ technology for the clearest and most abundant colors ever to reach a laptop.

TNC.com owner Eric Redulfin said High Grounds Café breaks the barriers in what used to be Internet-surfing-only cyber cafes. “The environment now is totally different in terms of cyber cafés. What used to be just for Internet surfing and browsing metamorphosed into complete full-fledged gaming centers. Of course the Internet is still there but gaming now takes the spotlight and the attention of game-loving and esports aficionados in the country.”

Redulfin bared that High Grounds Café will also be the perfect breeding ground of future Filipino esports stars who can give esports players from other countries a run for their money. “The Philippines is a young entrant in the global esports arena. Compared to other gaming countries, I could say we’re behind but that was 2-5 years ago. Now, even if we started competing only last year in tournaments abroad, we gained much attention already with the recent triumph of the TNC Pro Team during WESG,” he said. 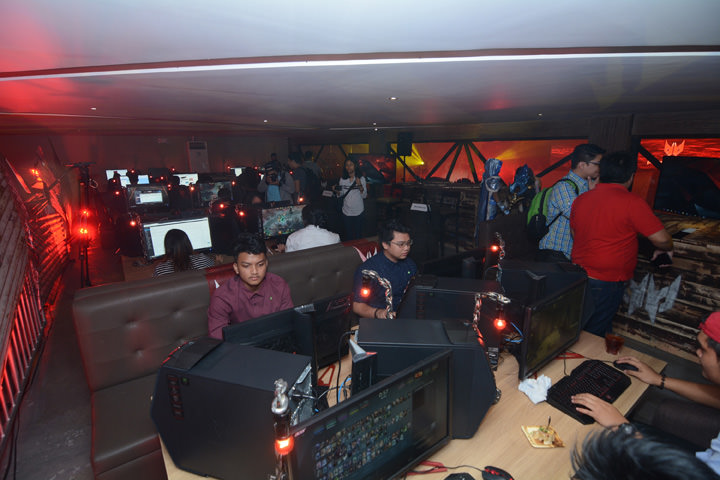 Redulfin and team manager Paulo Sy both admitted it’s tough to maintain a competitive team that should be well trained and funded. But with the arrival of the Predator desktops at High Grounds, they know that more and more esports “athletes” or gamers will have full access to powerful PCs that can deliver the best—and only the best—experience in leisure and competitive gaming. 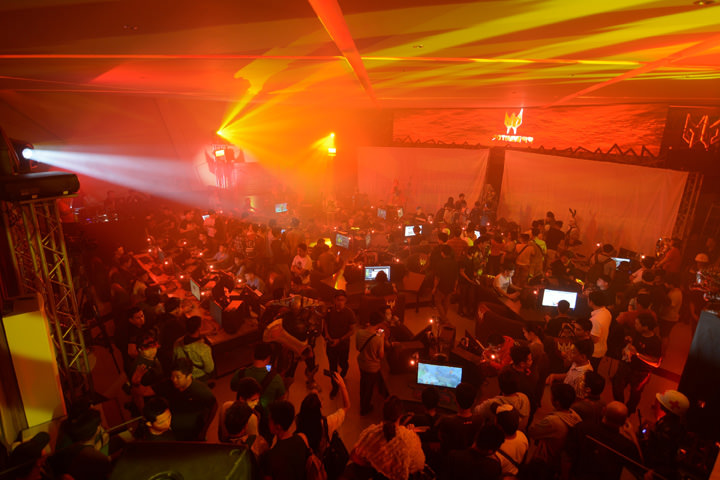 “The players train for 8-10 hours every day and they need the best PCs to help them visualize and conceptualize strategies for every game. With their power and brawn, the Predator desktops are a big help in our aim to promote esports and hopefully, we can find the next best players that will bring pride to our country in future esports competitions abroad and help promote TNC as well,” declares both Redulfin and Sy.

“We are glad that TNC decided to use Predator desktops as their only gaming rigs at High Grounds Café. It just goes to show that Predator remains to be the only preferred gaming PCs by serious esports competitors who only want the best with the most premium components found inside, those that won’t conk out in the heat of the game any time of the day. Esports is serious stuff and is ultra-competitive that needs only the best PC for gameplay, and Predator is definitely it, without question,” explains Clark Gurden, Predator Brand Ambassador, Predator Headquarters.

For his part, Jerome Matti, NVIDIA Consumer Sales Lead, Philippines, said: “We build the ultimate platform for gamers. NVIDIA GeForce GTX 1080 and 1060 GPUs are based on our most advanced Pascal architecture that delivers amazing speed and power efficiency, plus innovative new gaming technologies. And our advanced G-SYNC monitors are designed to give gamers incredibly smooth, tear-free gameplay. Together, they redefine what makes a perfect platform for the new generation of content. And with Acer’s exquisite craftsmanship, we are able to bring the world’s most advanced platform to the Philippines’ biggest iCafe, High Grounds powered by TNC. We are thrilled to see more and more GeForce PC gamers in the Philippines!”

Surf, Sand, and Sent Emails from Boracay (Ticket’s for free!)