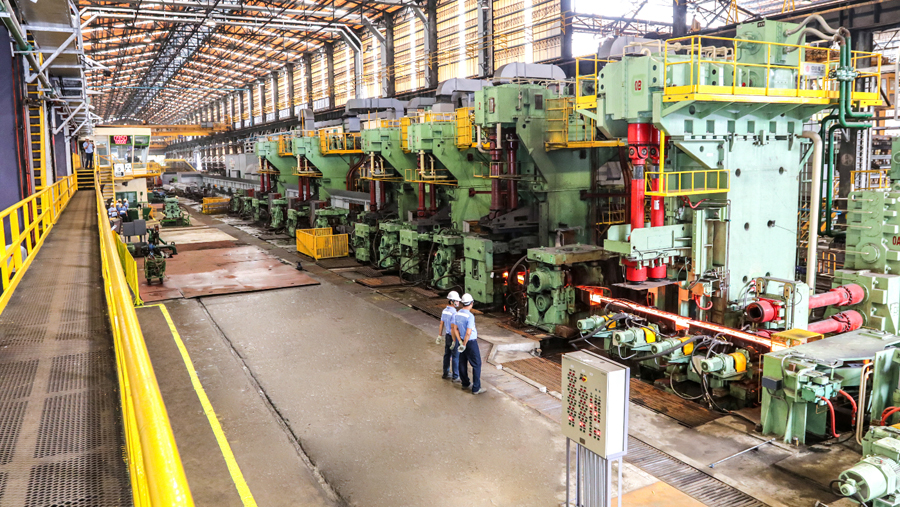 It takes tons of courage and dedication to forge ahead—much less expand—one’s business amid uncertain times as the pandemic disrupted industrial production worldwide.

SteelAsia, despite being the country’s largest steel manufacturer, was not exempted from the economic uncertainty brought upon by the health crisis. The company took a hit last year with revenues down to about only 70 percent of its 2019 output.

Any other CEO would have decided to take a step back, but for Benjamin Yao, recognized in the industry as the man of steel himself, it was an opportunity to shake things up and innovate new solutions. The result: An organization that continues to thrive at a time when most businesses are still trying to recover. In fact, starting in March this year, all of its six plants are running at 100 percent capacity, and it was able to protect and keep the jobs of its over 3,000 employees. “It took a pandemic for the Philippines to do what is right in the construction sector, something which we started 20 years ago,” he added.

SteelAsia’s CEO, Benjamin Yao, sets his sights on supporting the growth of the country’s steel industry.

Powering through a pandemic

Apart from the company’s agility, it was also through the help and support of industry partners and stakeholders—including Meralco and its subsidiary MSERV—that SteelAsia was able to bounce back in record time.

“We are in an industry where power is a major cost—a major component—aside from the raw materials. In fact, labor is much, much lower [a cost] compared to power and fuel. Meralco plays a big role in building the steel industry,” he said.

Meralco has been the distribution utility for SteelAsia’s Meycauayan plant since 1988. As the steel manufacturer’s operational needs grew over the years, so did the partnership with Meralco, who continued to address its power requirements as needed.

The partnership between the two companies began over three decades ago, when the power distributor energized the steel manufacturer’s plant in Meycauayan, Bulacan.

A key example was when SteelAsia started manufacturing reinforcing mesh and ramped up the production of steel rebars, which led to the decision to migrate from 34.5-kV to 115-kV. The plant’s migration was completed in August 2018, resulting in optimal power quality and minimal interruptions.

“The migration, together with the load flow analysis greatly helped in stabilizing the voltage supply in our Meycauayan plant. Being connected to the 115-kV also greatly reduced the systems loss being charged to us,” Yao said.

MSERV, an energy solutions expert, took care of the supply and replacement of the power circuit breaker in SteelAsia’s Batangas plant, which ensured the safe condition of its electrical system.

The two companies are also looking to work together to energize a new plant that SteelAsia will begin constructing in 2022.

SteelAsia also takes pride in being able to keep its employees and provide a livelihood for them, despite being severely affected in the first few months of the pandemic.

“We did not retrench any employees. We are, in fact, hiring more people today. We also have more plants coming up: one in Compostela, Candelaria (Quezon), Cebu, another in Lemery, Batangas, and yet another in Concepcion, Tarlac,” Yao said.

At a time when companies are reducing their manpower, SteelAsia was able to retain—and even continues to grow—its workforce.

“And because of COVID-19, they wanted to lessen people in job sites. Suddenly, our cut and bend products are very much in demand. Off-site fabrication work has become very popular; we deliver to the job site and the rebars are ready for installation.”

SteelAsia pioneered off-site fabrication that introduced cut and bend, a value added rebar solution, to the Philippines where rebar work was done primarily at construction sites.

Stakeholders all-in as we bounce back

Yao underscored the importance of support both from the government through efforts to level the playing field and crack down on substandard materials and from utility firms through faster installation of high-voltage lines.

“In certain places outside of Meralco’s franchise, it takes about four years to set up high-voltage 115-kV transmission lines. I think that would turn off a lot of investors because there is a lot of uncertainty within the four year period. That is a suffering that we all bear and that is why we still do not have a steel industry in our country,” he said.

“We produce two million tons of steel but most of our steel products remain imported: I-beams, H-beams, sheet piles. We import 100 percent of these from our neighboring countries. And these are the products that we in SteelAsia would like to go into and these require high-voltage,” he added.

To ensure that substandard steel products do not flood the market, Yao said SteelAsia has been working closely with the Department of Trade and Industry and its Bureau of Philippine Standards.

“The opportunity is still here in the Philippines”

While he is first to acknowledge that the Philippines has been lagging behind when it comes to steel infrastructure, citing as example the Metro Manila Skyway project that began construction in 1995 and formally opened only in January this year, Yao remains optimistic. “The opportunity is still here in the Philippines—not in Singapore, not in Japan. We just have to do what we can do.”

“If Vietnam was able to dramatically increase its steel production, that can be done also in the Philippines. We are not a small country—we are a country of more than a 100 million people so there is a market here. There is demand,” he said.

“We are doing our part. The pandemic is separating the men from the boys, so to speak…It is tough but we don’t stop. In fact, we are still expanding. This is our main thrust: to serve our country,” Yao added.

Big Wins for NutriAsia at the 18th Philippine Quill Awards!