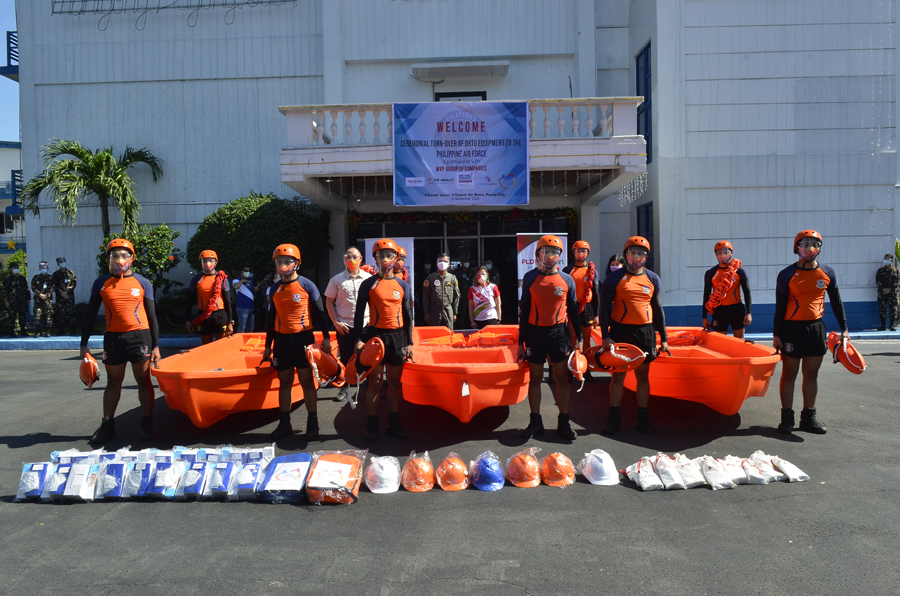 The PLDT-Smart Foundation, One Meralco Foundation and Metro Pacific Investments Foundation turned over rescue boats and floatation devices to the Philippine Air Force to aid in their emergency and rescue operations.
Recent

The MVP Group, which is composed of the companies under the leadership of Manuel V Pangilinan, pours in support to families affected by Typhoon Ulysses (international name: Vamco).

“We salute you, our brave men and women across the MVP Group, for tirelessly helping our fellow kababayans. In a pandemic, that is heroism. Salamat sa inyong pagmamalasakit,” Pangilinan said.

PLDT and Smart, through the Alagang Kapatid Foundation, distributed relief snack packs to around 500 families in Barangay Banaba, San Mateo, Rizal. PLDT also provided 500 relief packs to affected communities in Apalit, Pampanga. Facemasks and faceshields will also be given to residents in some areas in Cagayan, also through AKFI.

PLDT, through the Philippine Business for Social Progress (PBSP), will distribute relief packs to its partner communities in Calawis, Antipolo City which is located along the Marikina Watershed.

“With the several typhoons we have experienced in our country, PLDT-Smart and our Foundation were better prepared to respond to the needs of our people. We counted on our network of personnel and sales teams all over Luzon to immediately provide relief to affected communities. The bayanihan spirit is alive in the PLDT Group, with MVP providing the needed leadership during moments of crisis,” said PLDT-Smart Foundation President Esther Santos.

PSF and Smart have been actively serving typhoon victims in the Bicol Region since Typhoon Rolly. With the onset of Typhoon Ulysses, relief operations have extended as well to families in Metro Manila that experienced floods, including Marikina. With the devastation caused by massive flooding, PSF and PLDT-Smart Sales teams are also conducting relief operations in Rizal, Bulacan, Nueva Ecija, Cavite, Batangas and Laguna. Relief goods have also reached the provinces of Cagayan and Isabela.

“Despite the ongoing crisis, Filipinos remain hopeful because of the unwavering spirit of bayanihan. AKFI has been a witness to the change brought about by even a small act of kindness. It honestly inspires us to serve more communities and families in need. And we will do that as long as our Kapatids continues to trust and support the foundation’s efforts,” said Alagang Kapatid Foundation, Inc. Executive Director Menchie Silvestre.

AKFI and Smart provided snack packs and bottled water to 1,000 individuals from Barangay Tañong, Marikina City, which is a few meters away from Provident and close to the evacuation center of Barangka.

One Meralco Foundation (OMF) handed out 1,300 relief packs to affected families in Marikina beginning with those from Barangay Tumana who were seeking shelter at Marikina High School last Thursday afternoon. This was followed by a distribution of 600 food bags in the heavily affected areas of Rodriguez and San Mateo, Rizal. Earlier, the Meralco Rescue Team also deployed their boats and safety personnel in Commonwealth, Quezon City and Marikina to help in efforts of the local government for search and rescue.

Over the weekend, the OMF also sent out over 2,000 food packs to affected communities in the province of Isabela, Ilagan City and Cagayan. Through OMF’s partnership with the Philippine Air Force and the Philippine National Police, the food packs were distributed in evacuation centers in Tuguegarao City, Amulung and Solana, Cagayan.

Meralco also continues to support the power restoration efforts in Albay, Camarines Sur and Catanduanes where it deployed 206 linemen and support personnel who are working with various electric cooperatives in the area. Gensets were also lent by the company to support the operations of government offices and hospitals. The OMF also deployed its solar mobile charging stations in the provinces severely hit by Typhoon Ulysses. It also distributed 1,000 food packs in the heavily devastated communities in Catanduanes and Tinambac and Tigaon, Camarines Sur.

The Metro Pacific Investments Foundation (MPIF), along with AKFI, organized a relief effort initiative where it turned over 155 10-kilo vegetable packs in communities in Riverside, Sitio Sto. Nino in Barangay Wawa, Rodriguez Rizal.

In addition, the PSF, OMF and MPIF turned over rescue boats and floatation devices to the Philippine Air Force to aid in their emergency and rescue operations.

Maynilad also turned over about 4,000 snacks and bottled water bundles to families affected by Typhoon Ulysses in Muntinlupa, Malabon and Quezon City. Around 1,500 bottled water was also distributed to communities in Tanay and Manila, while 200 blue jugs of drinking water were turned over to Cagayan and Tuguegarao.

MVP customers can do their part

Customers of PLDT, Smart, Makati Medical Center and EasyTrip also have the opportunity to contribute to the ongoing relief efforts of Tulong Kapatid.Current MVP Rewards members can help typhoon-hit communities by converting their rewards to donations to PLDT Smart Foundation.

Donations can help mobilize resources to help rebuild the lives and livelihood of affected Filipinos.

ePLDT marks 20 years of being premiere data stronghold in PH