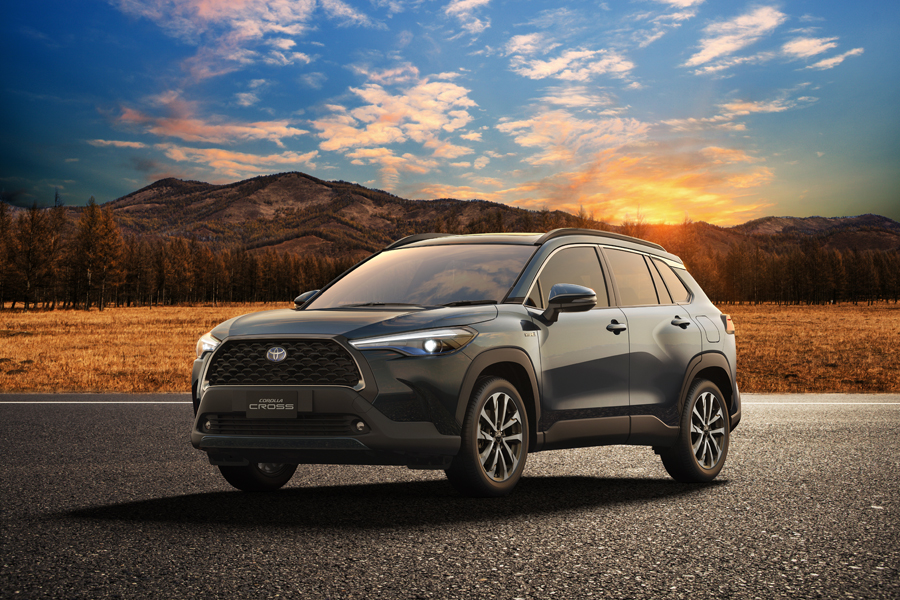 13 August 2021 SINGAPORE – The Toyota Corolla made its debut in November 1966 in Japan as a 1-litre compact 5-seater sedan, and within two years, doubled its annual production from 480,000 to 1.1 million vehicles. The introduction of the Toyota Corolla was a catalyst for mass car ownership in Japan, and the rest of Asia.

There was no looking back, and its sales grew from strength to strength over the past 55 years. Today the Toyota Corolla celebrates a spectacular global sales milestone of 50 million cars. This milestone underscores the robust confidence and belief in the Corolla’s build quality, reliability, safety and durability. Now in its 12th generation, it is Toyota’s most recognised model, and one of the world’s top-selling cars.

In 1966, Tatsuo Hasegawa, then Chief Engineer, was adamant that the Corolla must encompass features that bring happiness and well-being to people around the world. Toyota has continued to hold fast to this philosophy over these last 55 years.

The Corolla then evolved through 12 generations from 1966, with each generation offering more advanced features than the previous.

Available in more than 150 countries around the world, the Corolla is regarded as a ‘well-loved member of the family’. It continues to serve faithfully and dependably for different purposes – from reliable family car; to covering long commute distances and as a fun, sporty choice customised to changing customer lifestyles.

About one out of every five Toyotas made was a Corolla. This model has evolved, and its various iterations the world over have exceeded expectations in terms of driving pleasure and performance, safety, aesthetics, technology, reliability and durability.

With each generation, Corolla engineers and designers at Toyota Motor Corporation have strived to incorporate cutting edge features, like improving interior cabin ergonomics, connectivity features. This included the Toyota New Global Architecture (TNGA) in the 12th generation in 2019 that has further optimised the performance and marketability of every model, and Toyota Safety Sense1 Toyota’s proprietary suite of advanced safety and driver assistance features like Lane Tracing Assist1.

Important Footnote:
1. Not all Toyota Corollas in Asia have Toyota Safety Sense or Lane Tracing Assist. Each market should review specs based on your local offering, and edit the above information accordingly.

Hundreds of thousands of motorists in Asia have enjoyed and appreciated the Toyota Corolla from its early genesis. For many, the Corolla has been a centrepiece in the building of “treasured memories”. A common sentiment from many Corolla owners, regardless of country or region, is that many choose to keep their Corolla, or replace it with another Corolla.

Mr. Hao Tien, Chief Operating Officer of Toyota Motor Asia Pacific said: “We are absolutely delighted that we can celebrate this stunning sales milestone across Asia. The Corolla in many ways, mirror the growth story of Toyota around the world. It has kept faithful to its heritage and ethos of bringing happiness to every person who drives one; it has also stayed nimble with

the times, always keeping several steps ahead in terms of design, comfort, and technological features to ensure uncompromising safety, performance and reliability.

“I have been a Corolla owner myself. My wife and I drove one. Later, we bought another one for our daughter. We loved our Corollas, and we used them daily for work, weekends, and errands.

“On behalf of Toyota, we would like to thank and express our deep appreciation to all Toyota dealers and Corolla owners who have contributed to this global milestone. We are confident with your continued and enthusiastic support, Corolla will remain a well-loved and trusted model for decades to come.”

There are many stories of Corolla fans owning multiple generations of the model since its 1966 launch. One customer in Pakistan, where the Corolla has been hugely popular, has owned six generations of Corolla.

Die-hard fans in Singapore, where the model has been a perennial favourite since 1967, have formed their own clubs. In fact, the Corolla makes about a third of all Toyota sales between 2015 to 2020. The 12th generation Corolla took top spot as Singapore’s favourite sedan in 2019, thanks to its hybrid options, and cutting edge Toyota Safety Sense (TSS) feature.

The Corolla market in Malaysia has seen continued growth since it was first launched in 1968. Motorists in Malaysia have been consistently positive about this model since it was introduced. More than 40,000 units of the 11th generation Corolla were sold between 2006 to 2013.

In the Philippines, many Corolla owners have driven their fuel-efficient and very reliable cars over long distances in the archipelago. One drives a vintage model, which was semi-restored as his wedding car!

TOWARDS CARBON NEUTRALITY & CONTRIBUTING TO SUSTAINABILITY

Toyota is very much committed to achieving zero CO2 emissions and a net positive environmental impact towards the future. The goal is to reduce CO2 emissions from new vehicles by 35% or more by the year 2030.

Among Toyota models, the Corolla offers hybrid electric options that provide all the torque and acceleration needed on everyday driving and highways. It is drawing from the leadership of Toyota in electrification technology since the launch of the Prius Hybrid 21 years ago.

The 11th generation Corolla, introduced in 2012 was the first model to offer hybrid electric options. Today, Corolla fans can choose from a variety of hybrid and internal combustion drivetrains.

Yasushi Ueda, Chief Engineer in charge of Development of the 12th generation Corolla says: “The Corolla is a car that is always ready to evolve to meet customers’ current needs. For this reason, it has been a long-term favourite of customers all over the world.”

Looking ahead, Toyota may consider hydrogen-powered vehicles as a viable alternative to our current electrified options. Toyota President Akio Toyoda, who races under the alias “Morizo”, drove Rookie Racing’s hydrogen-powered Corolla Sport in 24-hour endurance races in May and August 2021. Mr. Toyoda founded Rookie Racing, as a “family-like professional team” to create “ever-better cars” with Toyota Gazoo Racing through motorsports.

The Rookie Racing Corolla Sport used hydrogen combustion to power its 1.6-litre inline 3-cylinder engine. In May it completed 385 laps at an average speed of 67 km per hour. In August, various improvements were achieved from approximately 40% quicker refuelling and 15% increase in torque.

The hydrogen-powered engine is an internal combustion technology that emits virtually zero CO2. Toyota envisages that cars could potentially use this technology to offer more sustainable, carbon-neutral solutions in the future. This is different from the hydrogen fuel-cell powered Mirai, which adopts a different technology that generates electricity from chemical reaction between hydrogen and oxygen.

LAUNCH OF COROLLA CROSS: MOVING INTO A NEW ERA

Over the past 55 years, the Toyota Corolla has been available in different variations. In Asia, the most popular Corolla option is the 4-door sedan.

Now, in response to changing lifestyles, Toyota has introduced an SUV to the Corolla line-up to seamlessly satisfy diverse customer needs, with a full menu of advanced features in safety, performance and comfort.

Based on the “Corolla Meets SUV” concept, the Corolla Cross signals the transition to a new era of changing consumer preferences. This new model was globally introduced in Thailand last year.

Since its launch, demand has been strong for both the gasoline and hybrid electric engine models, as the car comes with its renowned TNGA. Corolla Cross offers cutting-edge performance, coupled with Toyota Safety Sense (TSS) that ensures complete peace of mind.

Cambodia launched the Corolla Cross early this year. This has further elevated the status of Corolla, first introduced as a sedan in the country in 1993. The new Corolla SUV has given the

Corolla line-up added appeal, especially after the 12th generation Corolla Sedan launched in 2019, today regarded as one of the most preferred car choices in Cambodia.

The Corolla Cross is available in other Asia markets including : Brunei, Indonesia, Malaysia, Myanmar, Pakistan, the Philippines and Vietnam.

While its rich heritage and history has kept the Corolla grounded with the same values that it was founded on, Toyota looks ahead to pursue constant “kaizen”, or continuous improvement.

ALL-DAY FUN AT HOME: A list of activities you can do while staying home with the vivo Y31