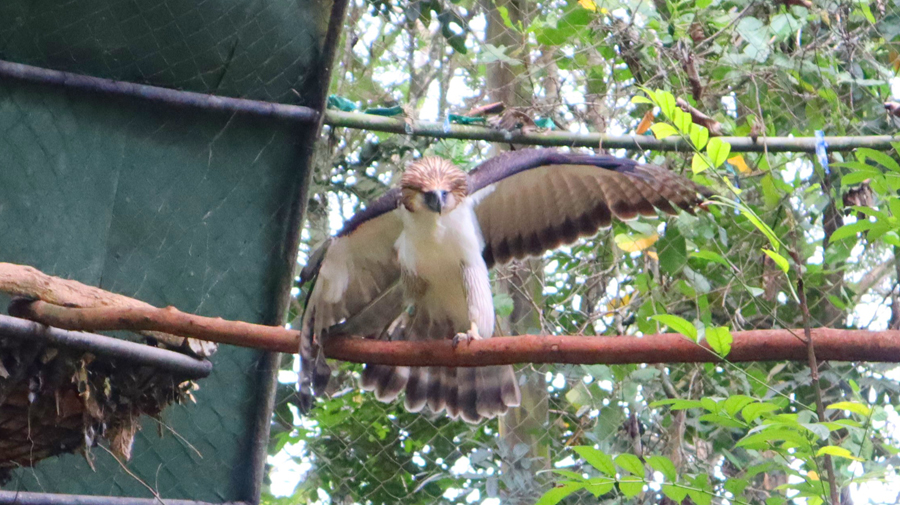 In 2013, when he was brought to the Philippine Eagle Center in Davao City, the brown and white eagle was weak and sickly. He needed caring and nurturing from kind and compassionate people whom he found in the Center. He recovered and got his eagle-strength back and, after three years, was released back to the forest in the Obu-Manuvu ancestral domain in Brgy. Carmen, Baguio District in Davao City.

Adopted by PLDT, Inc., thru its Community Relations Division, this vigorous bird has endured a tough existence. From the harsh law of the jungle to the harsher cruelty of thoughtless, irresponsible humans, MVP Matatag has emerged victorious. His name stands for stability and resilience in the face of challenges.

Philippine Eagle Foundation’s (PEF) Andi Baldonado related that Matatag thrived in the wildlife until he was shot and was brought back to the Center in 2016. “Matatag had a .22 caliber bullet wound that fractured his right wing. He has now fully recovered after undergoing treatment at the Center.

But his injury has permanently affected his flight so he cannot be released again because it risks his chance of survival in the wild,” Baldonado said.

“We are glad to know that Matatag has survived this latest threat to his life and is now doing well. His strength, stamina and resilience are really stellar,” said PLDT Community Relations Head Katherine Diaz De Rivera.

“Matatag forms part of PLDT’s efforts to contribute to the sustainable development of the country. This initiative is specific to the United Nations Sustainable Development Goal #15: Life on land which takes urgent action to protect animals, as well as plants,” Diaz De Rivera added.

She said the project also indirectly contributes to the Effective Environmental Stewardship sustainability pillar that make up the PLDT Group’s Sustainability Framework as the company’s climate change mitigation efforts help both humans and highly vulnerable wildlife creatures like Matatag.

In 2019, PLDT further strengthened its sustainability efforts by establishing the PLDT Sustainability Office. It is tasked to help develop the PLDT Group’s business operations and corporate social responsibility activities in ways that not only ensure its continued success but also help create a sustainable future for the country.

He is currently in a relationship with his natural pair, Ariela. PEF Senior Animal Keeper Dominic Tadena observed that “they are preoccupied in building their nest bowl. Matatag himself uses the sprigs that I provide, to prepare their nest bowl for an egg. He even added freshly-cut leaves from the mahogany tree in their breeding dome.”

In fact, they are anticipating an egg from Matatag and Ariela next month.

Teleperformance Automation Academy upskills people for the workplace of the future