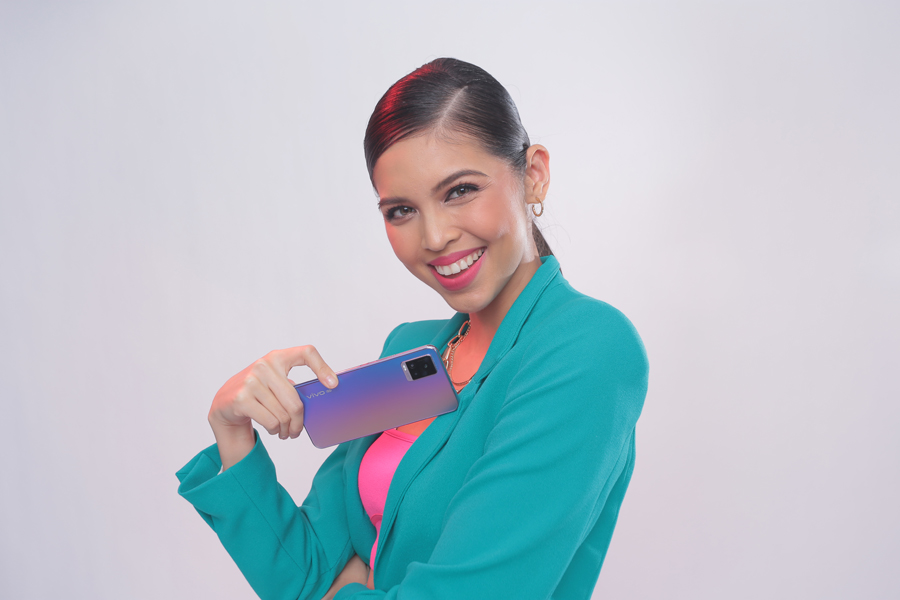 vivo celebrity ambassador Maine Mendoza with the new vivo V20 Pro in Sunset Melody. With her embodiment of self-expression and colorful style, Maine served as a judge during the entertaining “Snap Showdown Challenge” segment of the V20 series launch.
Recent

Creativity, focus, and style were in full display last Friday as vivo launched the V20 series via an entertaining and interactive livestream posted on its Facebook page.

The online launch filled with vibrant colors and visuals, hinting at the beautiful design of the V20 series, featured the “Creative It Kids” composed of creative fashionista Verniece Enciso, creative explorer Marvin Fojas, and creative viral sensation Dora Dorado, tech blogger Isadoestech, famed gamer JunnieBoy, and phenomenal star Maine Mendoza as they highlighted the fabulous features of the latest addition to the V-series and emphasized its role in helping them stand out and “Be the Focus”.

Hosted by Radio DJ Show Suzuki, the launch began with a Q&A portion featuring the Creative It Kids who revealed how they expressed themselves freely and allowed their ingenuity to shine and stand out even in a crowded digital sphere.

This was followed by a reveal of the V20 series’ innovative specs such as the 44MP Auto Focus selfie camera, the 64MP flagship level rear camera, and the ultra-sleek and thin design which were detailed by vivo community manager Jose Palabyab. In this segment, Palabyab signified that the vivo V20 Pro is the thinnest 5G-capable smartphone in the market.

These specs were featured in full display as Isadoestech and JunnieBoy discussed the smartphone’s powerful performance, gaming capabilities, and how these can give users a great advantage in content creation and gaming.

Perhaps the main highlight of the event, the Creative It Kids along with Isadoestech and JunnieBoy were divided into two teams and went head to head for an entertaining “Snap Showdown Challenge” which was judged by vivo ambassador Maine Mendoza. The two teams, Team Verniece and Junnie Boy and Team Marvin and Dora, competed in three challenges that utilized the V20 series’ selfie camera, rear camera, and epic slo-mo feature.

Throughout the livestream, live viewers were engaged through several pop-up questions on the V20 series.

Adding to the exciting announcements, Maine also revealed that those who purchase any of the three smartphones in the V20 series will get the chance to win a Ford EcoSport as part of the vivo Holiday Season promo.

The event concluded with the reveal of the vivo V20 x LANY TVC that further highlighted the power, beauty, and style of the V20 series.

Missed the livestream? Don’t worry, you can still learn how to #BeTheFocus and find out more about the V20 series by visiting facebook.com/vivo.philippines or vivoglobal.ph