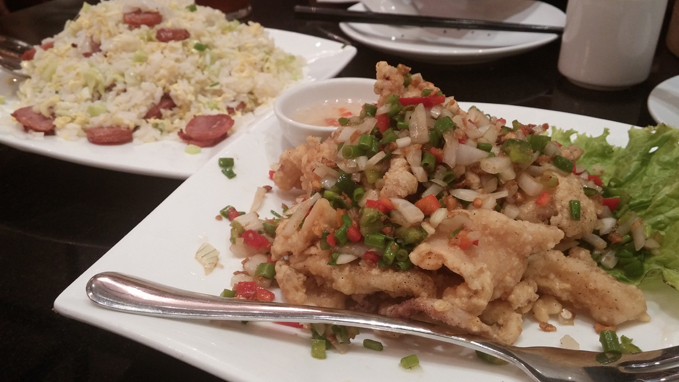 We’re suckers for comfort food, and that’s what we came for when we first visited Lugang Cafe last year. This time, we’re taking note of everything and telling you about it – what we ordered, how was it, and everything else.

Soft and moist. Nothing like the big white buns of Kowloon House that can be too starchy and bland. Anyway, we recommend you eat Lugang Cafe’s Pan-Fried Siopao while they’re still hot. 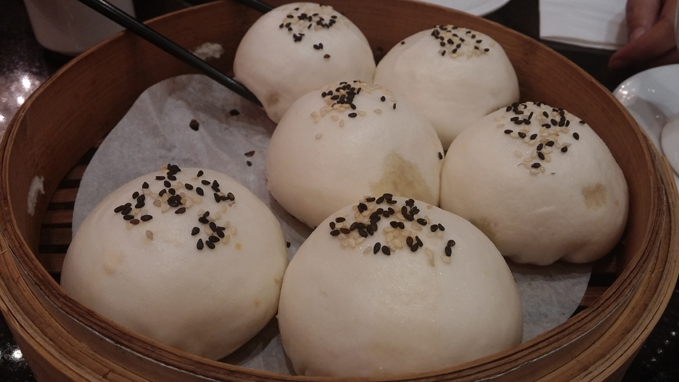 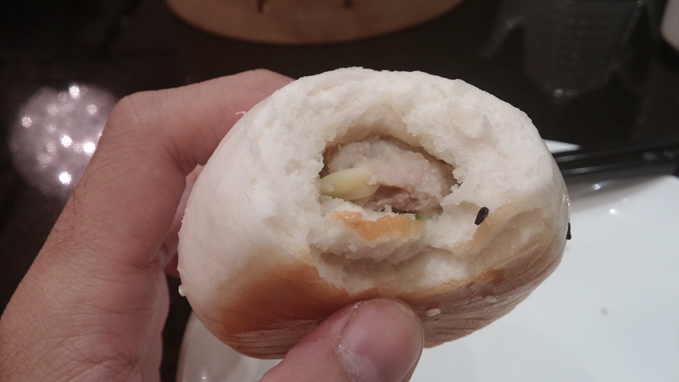 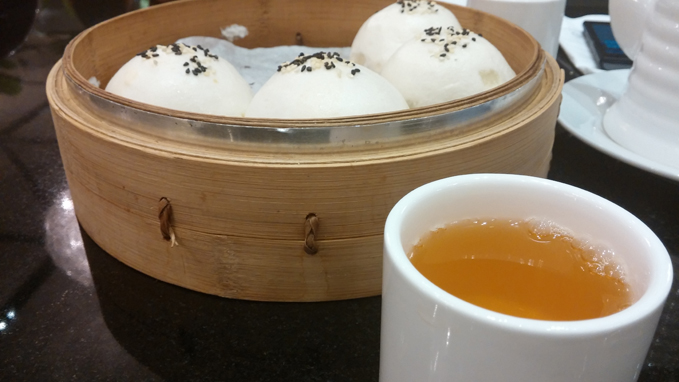 The meat inside has a subtle flavor, but there’s no complaining. Somehow that flavor has merged with the bun’s moist softness. If you down three of these you immediately get a hint that you’re full. The fried sesame seeds atop each bun, if you notice them in your mouth, provides some crunchiness. You are forgiven if you just wolf each bun down. They’re good. 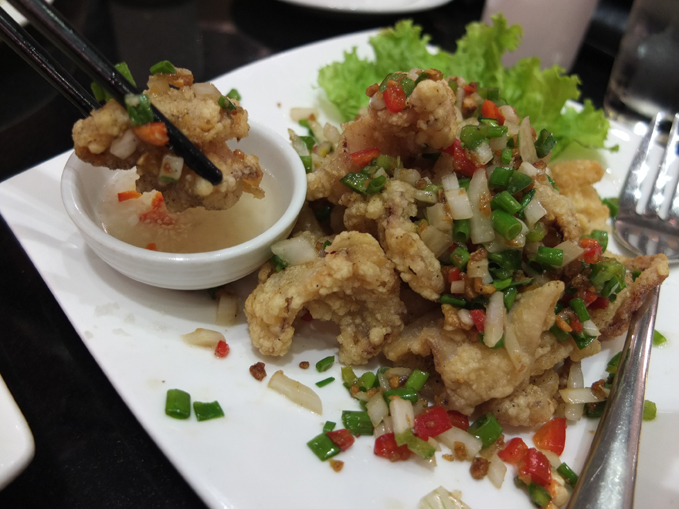 North Park’s has a strong, assertive chili oil blended with spicy vinegar. Lugang’s is more classy (there are days we run out of words), more subtle (you don’t want to just wolf everything down like a twelve year old would, instead, you slow down to enjoy it). You need to taste both versions to taste the difference. We’d like our Lugang Salt and Pepper Squid served with chili sauce. But if you are not into strong flavors, the non-chili sauce default mode is good, too.

This has an even, faintly oily vegetable taste to it, which is good because it doesn’t clash with the sweet and savory flavors of both the Sweet and Sour Squid (see above) and the Stir Fried Beef with Chili (see below). 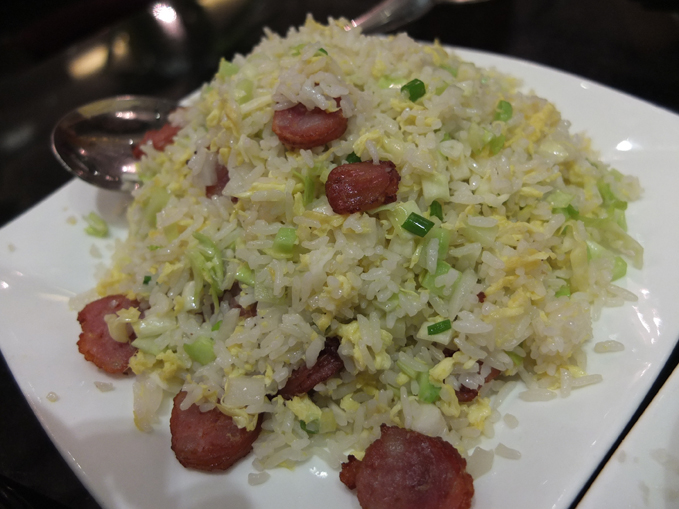 The chorizo sausage, whose slices accent the rice now and again, is ever so slightly sweet, in a meaty sausage sweet way. Like we keep saying, subtle.

This dish is constantly being heated, we suspect, because once it gets cold it loses some flavor. We took some home so we’ll find out. Anyway, the beef strands are sweet and I prefer to leave them heated, for that near-burned smell and taste. 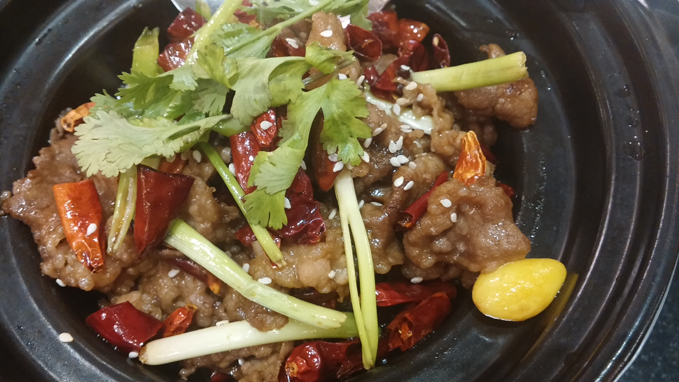 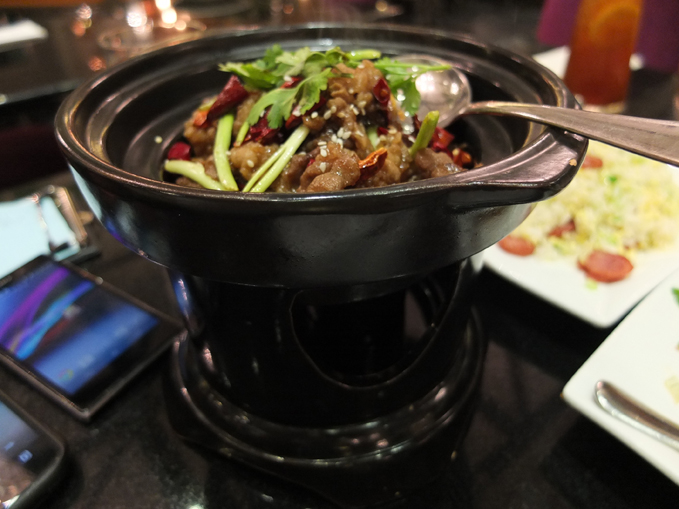 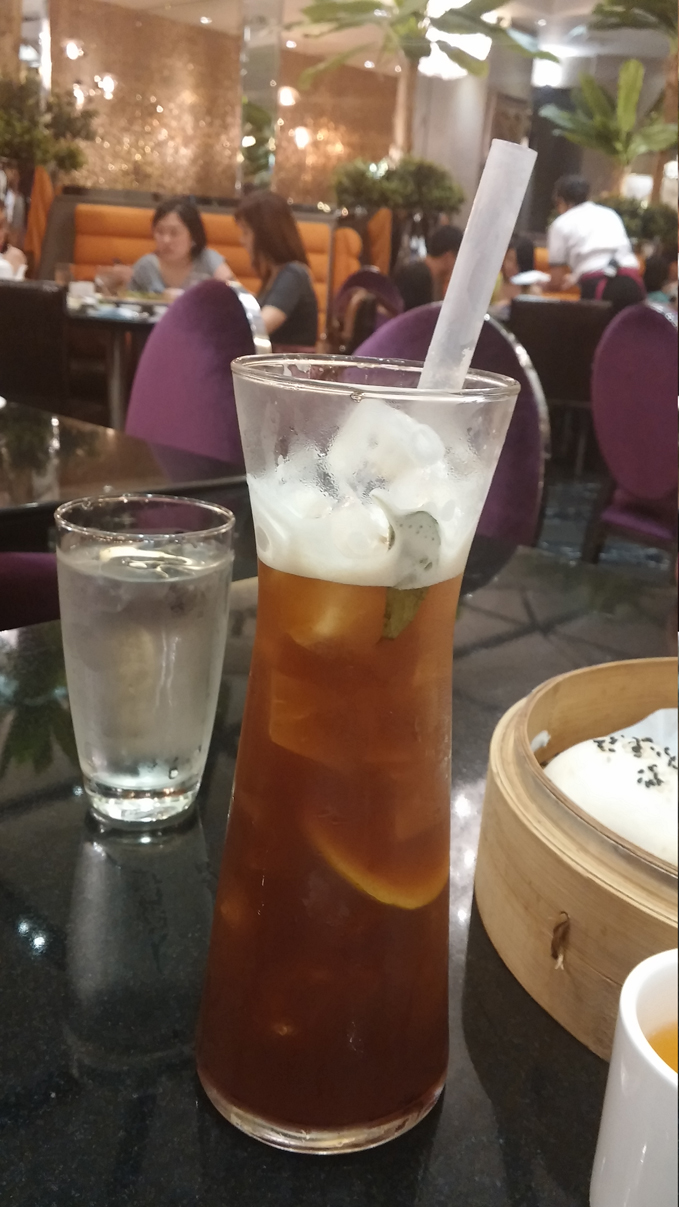 A bit too strong for my wife and I’s taste. We diluted it with water and it was fine.

Looks insurmountable. One big yellow iceberg of goodness. Tastes like the mango ice cream you ate as a kid. Two people can’t finish this. We didn’t. But if you have a twelve year old with you, this will be gone in a wink. 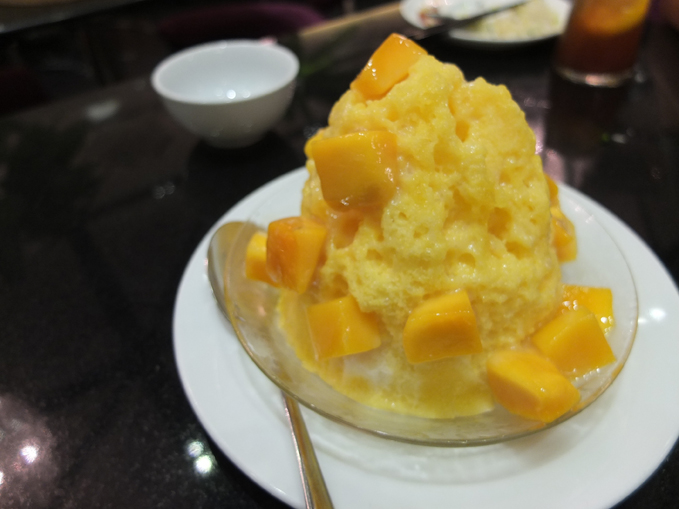 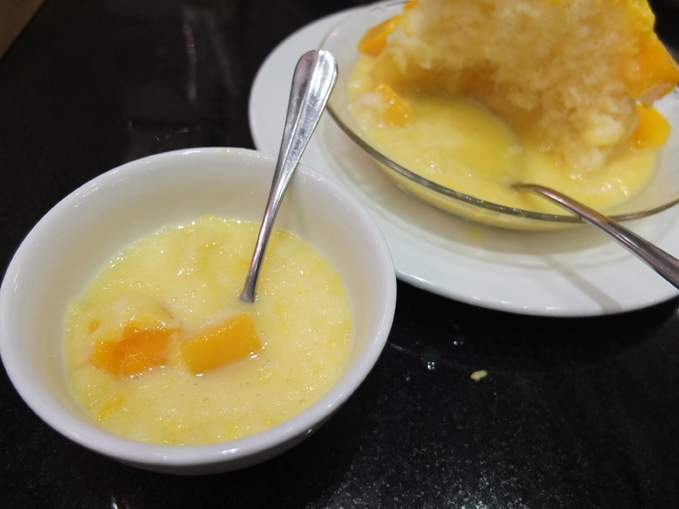 The clean fruity taste of the iced mango “cleans away” the meaty flavors of what we just ate. Good way to close our dinner.

There’s that, I don’t know what else to call it, a modern look which would be modern had it been the 1980s, a look that I like. The background music is some upbeat techno that’s oddly generic but okay. 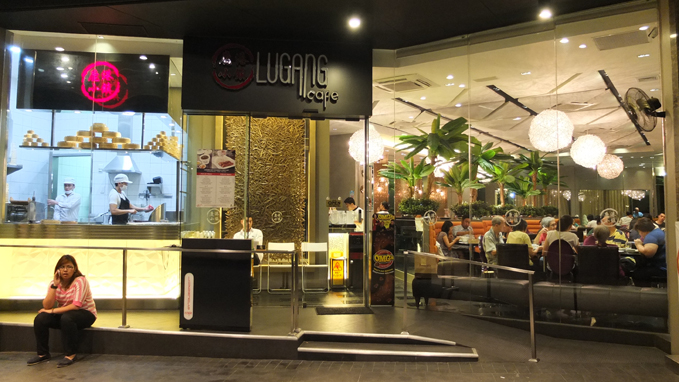 We’ve been here other times of the day and of the week and we can’t remember the music – that’s probably how it’s intended: comforting but not worth remembering. The place is strangely family-noisy, but this kind of white noise is comforting. Something you need while you eat, I guess.

We had to sit down outside – there was a waiting line. But as soon as we sat down, the line moved and we moved inside. An attendant immediately asked, “For two”?” a moment after we nodded, she was ushering us to a cleaned up table the next instant. That was quick. 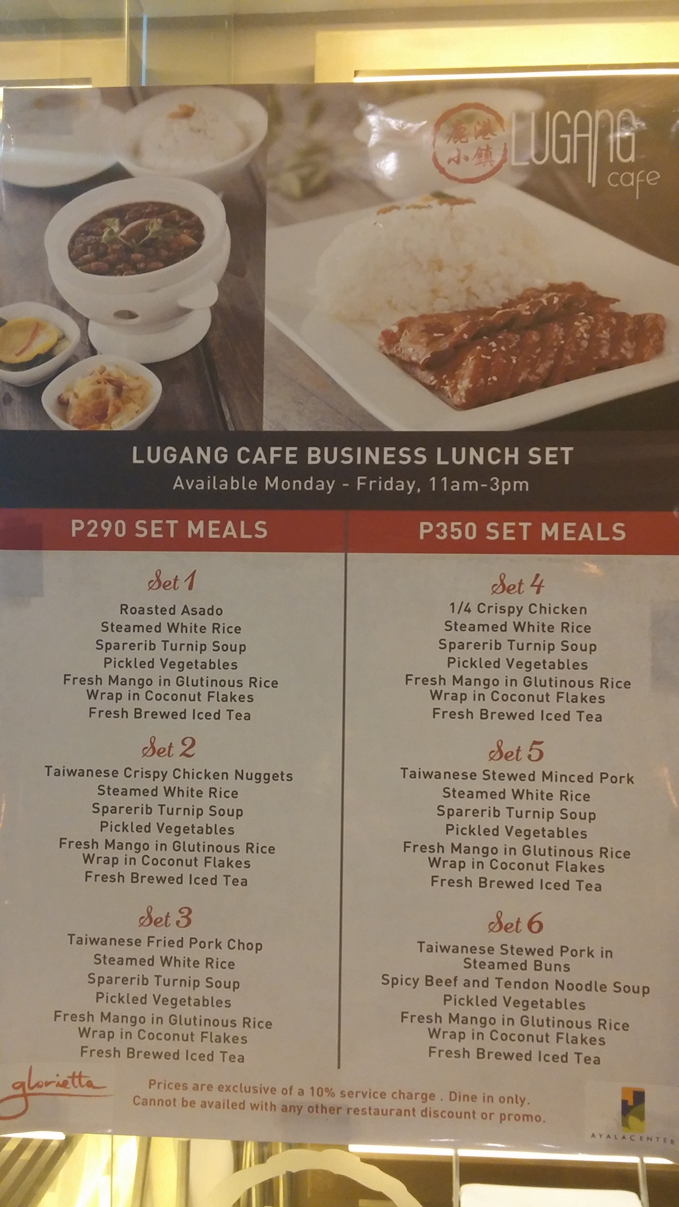 Key waiters and waitresses have radios, so that orders are quickly “punched in” by voice. That means even if you complain that some insect died on your plate, just as the waiter is picking up your dish-for-replacement, an order for the dish has already been dispatched via radio.

Very clean, quiet, and has that hotel-dimmed ambience. 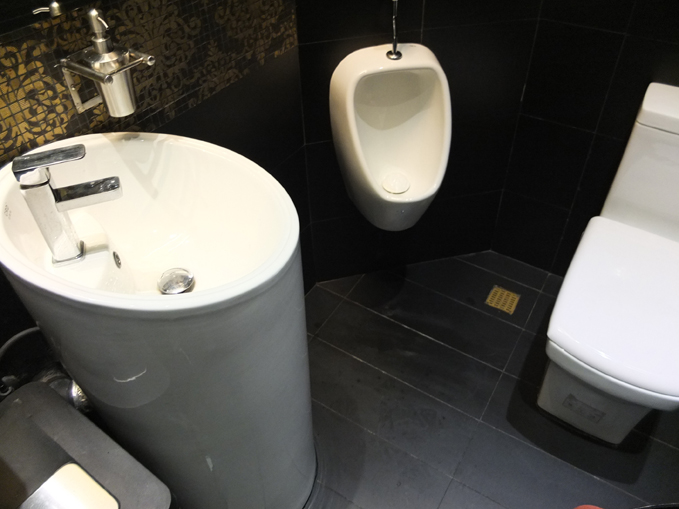 Not too small. Everything within reach.

Make sure this tiny clipboard (below) is on your table, otherwise your order may not have been logged into their system, which is what happened to our order. 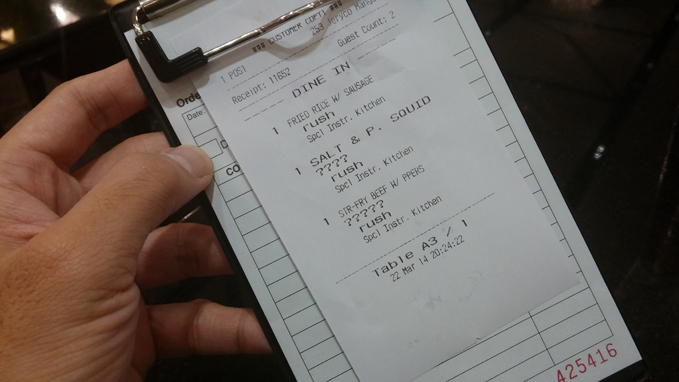 First time it happened to us, and we’ve eaten here dozens of times. Anyway, the moment one of the waiters notice this, because of their radios, it won’t be long till your order is served. A good, self-correcting system.

Strong, assertive flavors in most of the dishes, and appropriately subtle in some. But these flavors are of the Asian sweet and sour kind. 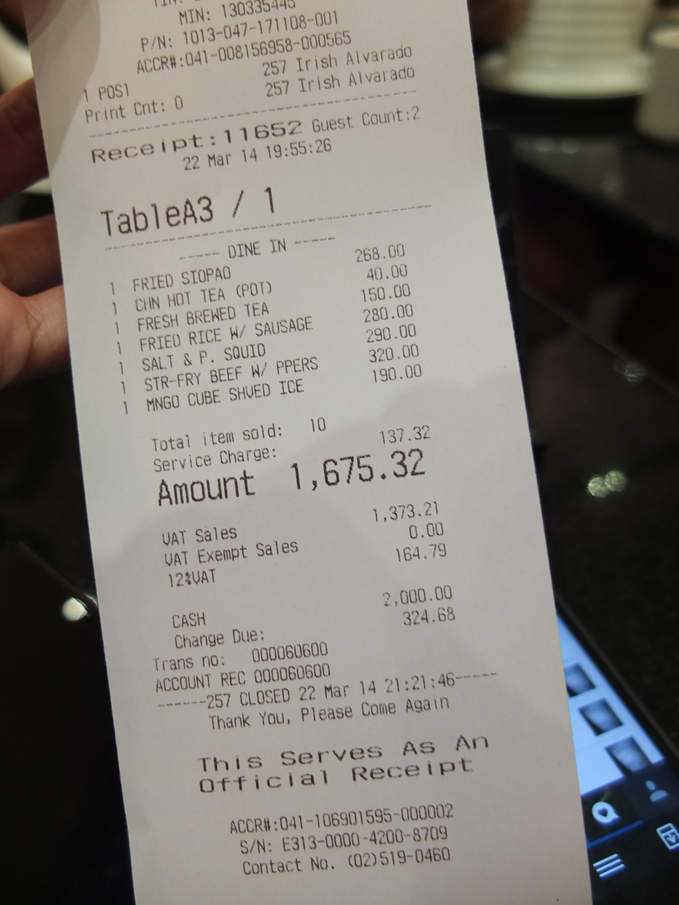 We keep coming back here. Maybe, so will you.