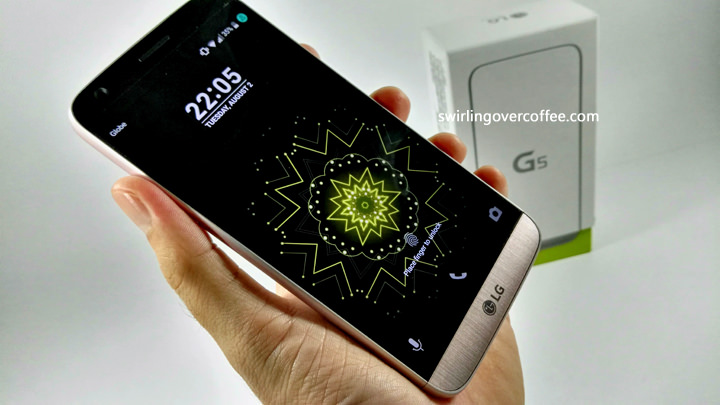 Three things mar the otherwise impeccably performing LG G5 and its utterly excellent stills (front and rear) and videos (FHD and 4K) – the design and tactile feel (the curved look of previous LG phones are gone), the small battery (7-8 hours of use), and the bannered modular feature (which we are not fans of). But after months of use, we are loving the LG G5 and its cameras (and the non-saturated images and crisp videos), its size is just right and comfy in your hand, and it can’t hurt that its price has gone down since launch. Two more things: the G5 has one of the loudest, yet audio-clear speaker we’ve ever heard in a flagship phone; and it’s the first to offer a 135-degree wide angle field of view secondary rear camera, which makes your landscape and indoor shots more awesome (more people in the frame, no need to step back).

Dual rear cameras have been implemented for bokeh (Huawei Honor 6 Plus, GR5 2017), optical zoom (iPhone 7 Plus, ASUS ZenFone 3 Zoom), and even extra depth of detail (monochrome sensor of the Huawei P9’s dual rear cameras). But only the LG G5 approaches it with one camera for normal field of view (but is actually wider than many smartphones’ ‘normal’) and a second camera for super wide angle field of view (FOV). I like LG’s wide angle approach since I take a lot of tight-spaced shots, with no room to step back, which happens a lot in various events (because photographers tend to box each other out for a good shot). Wide angle means you can fit more people in the shot, or take in the expanse of a scene to show how grand it is (something not usually possible with a small FOV sensor). Call me biased, but my main shooter right now, for event coverages and product reviews and videos, is this smallish phone right here. #LGG5 #lgg5ph #lgg5photography #duallens #dualcamera

We’ve been fans of the LG flagships – both its design and its cameras – from the LG Optimus G to the LG G4. Until late last 2015, we’ve been using the LG G3 for event coverages and product reviews; and the year before that, the LG G2 for similar needs. So we know what LG can do in terms of looks and tactile elegance and camera UI and image quality.

The only way to showcase the LG G5’s awesome wide angle lens is to show if off. Here we go.

Above is the normal 78-degree FOV main rear camera, shooting under a gray afternoon sky. 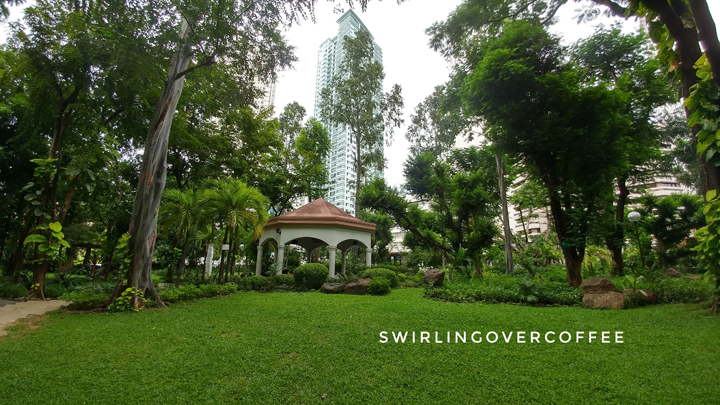 Now we switch to the 135-degree FOV secondary rear camera, to show you (1) how much more space is captured without even stepping back, and (2) that a fisheye lens effect is noticeable and looks cool (as though taken from a GoPro camera.)

But that’s not all. The wide angle camera can be zoomed in a bit to remove the fisheye effect, so you can get a more even and symmetrical image (see second image below). 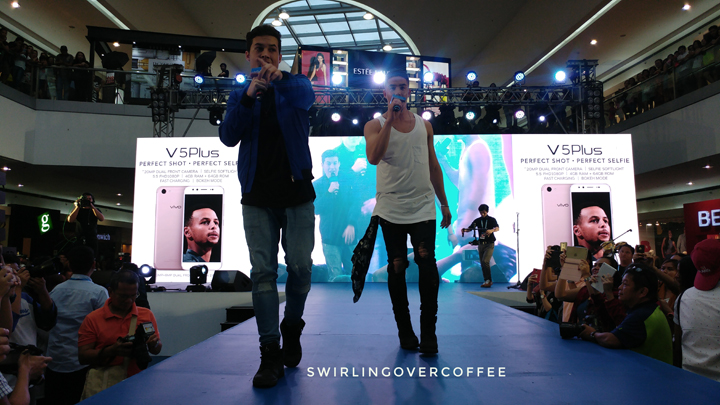 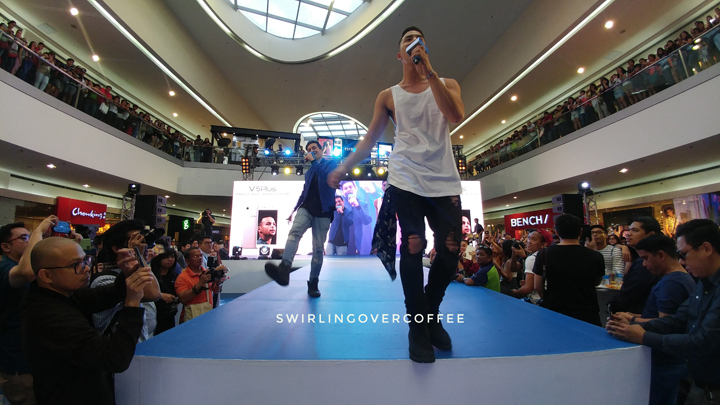 Wide angle, but zoomed in a bit.

Wide angle, but fully zoomed out.

A Quick Look Around the LG G5

You can browse the specs below before we check out more sample images (normal and wide and selfies) and videos.

While the secondary 8MP 175-degree wide angle camera is a wonder on its own (you’ve seen the shots above), the main 16MP rear one is awesome in its own right: low light shooting is great, white balance is spot on, capture speed is near-instantaneous, and bokeh shots (blurred background) are great.

The rear wide angle camera is useful for capturing landscapes, indoor cramped shots, and moments when you want to fit more people into the frame but can’t step back.

Handheld videos in Full HD look like they were taken with an attached stabilizer, and 4K offers more detail (but eats up battery and storage so get a big micro SD card). 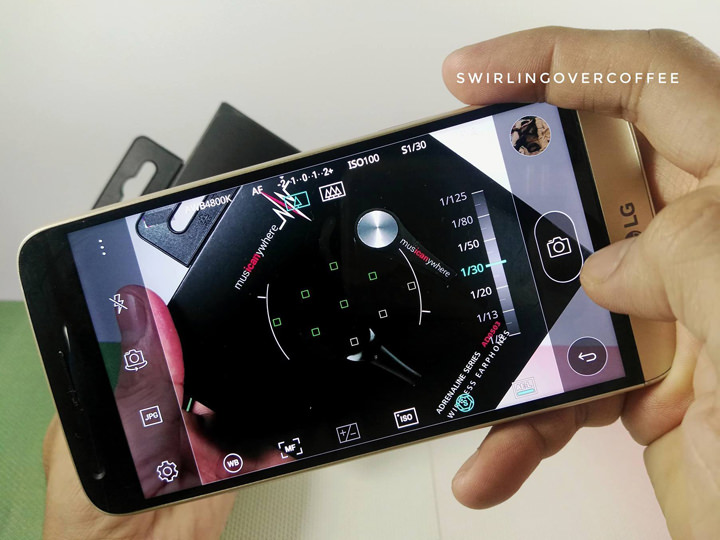 The camera UI is intuitive and yet has room for the pros (manual mode). We took selfies in dim lighting and were still proud to share them on social media. The G5, take note pro and enthusiast photographers, can shoot RAW.

LG remains one of the best when it comes to the selfie camera, as you can see in the sample shots. Against the light, under low light, even when the on-screen flash was needed (because the dim and uneven lights were unforgiving), the output was great.

The Full HD video below is amazing. It’s of a house razed by fire near where we live. Shot during an overcast late afternoon, with a slightly shaky hand, and with sounds blaring from all directions, the LG G5’s camera was able to keep up with the shifting focus (slight panning around) while providing great dynamic range and a “realistic” audio quality. The output isn’t even that shaky. If you pause the video (make sure to choose 1080p quality), you can marvel at the details captured: the side of the fire truck, the cloth of the uniforms of the police, the greenery of the trees, the depressing scene of the smoking house. If you listen with good speakers (or with earphones), you can tell that the audio recorded is far from flat – it’s the surrounding sounds of the scene. Videographers will appreciate this.

In the Full HD video below, a typical dimly lit, small venue concert setting, we capture the first three minutes of James Reid and Nadine Lustre’s duet, before arm fatigue set in (it was a long day of events we were covering) and the footage had to be stopped. But the shifting colors and dark and lighted spots and echo-like music were all captured smoothly. Again, all this was recorded hand-held. No separate stabilizing device, not even a selfie tick or monopod.

Below is a short continuous video using both the normal 80 degree field of view (FOV) rear camera and the 185 degree wide angle rear one. The recording shifts from one camera to other and back, showing how much of the scene is captured by both rear cameras.

Gaming presented no lags, videos were clear and highly detailed (awesome QHD display), launching and swtiching between apps were smooth, the speaker was impressively loud and full coming from such a small body and the audio was rarely strained. Even if it’s a tiny phone, typing on the G5 was comfy. And we liked holding a small phone to our ears during calls, which were clear. WiFI reception was also excellent, even if we were two rooms away from our router, we could still watch Netflix. The rear-mounted fingerprint sensor was spot on and accurate every single time (the phone unlocks as soon as your finger touches the sensor, no need to deep-press to click). If you’re the hand-sweaty type, you may want a grippy case for the G5, to avoid slips. 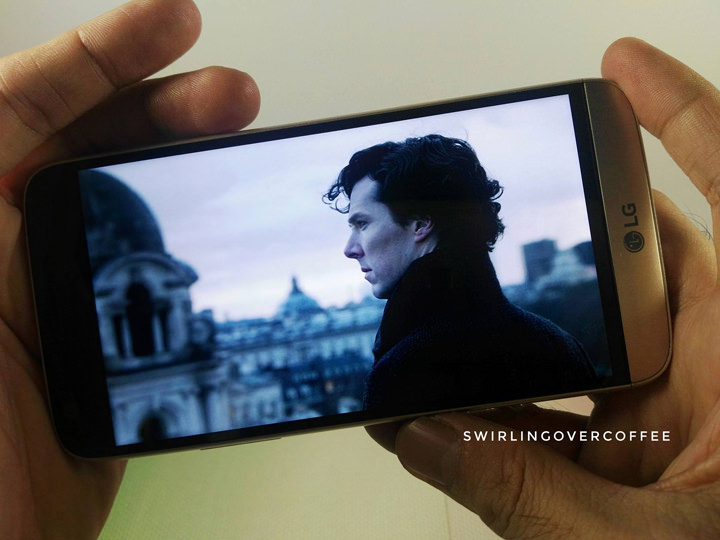 The always-on display, which we initially thought of as ornamental, turned out to be actually useful: it saved us the time it would have taken to wake the display up and check the time. The clicky power on button is also integrated with the fingerprint sensor, which is a nice touch. The display is not AMOLED but is sufficiently useful outdoors under bright sunlight. But we are somewhat bothered by the display’s need to keep lowering the brightness now and again, but only because we like the display to be bright and vivid. 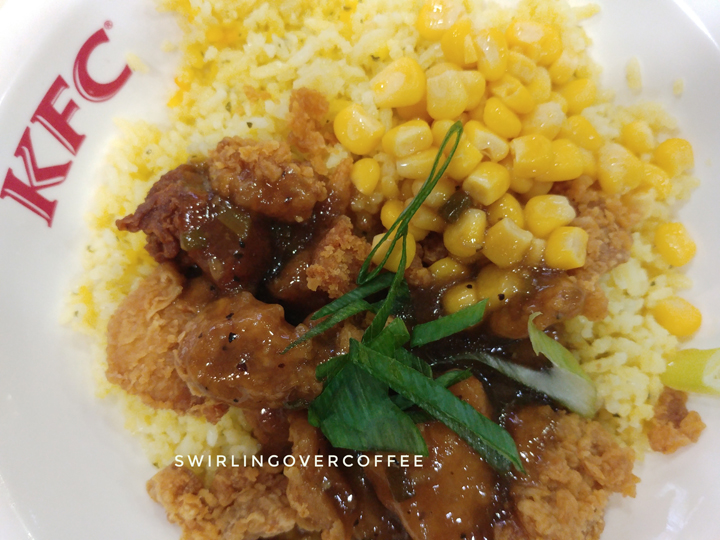 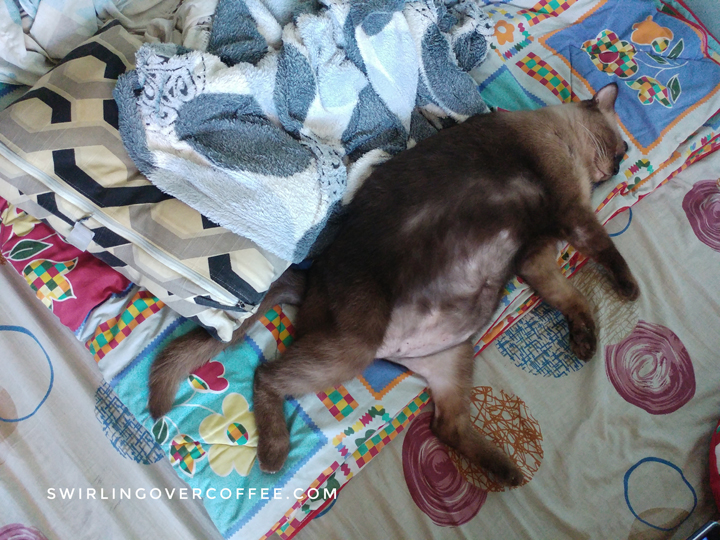 Pet. When you come back from the bathroom to discover that Senor Fluffy has taken over your bed. 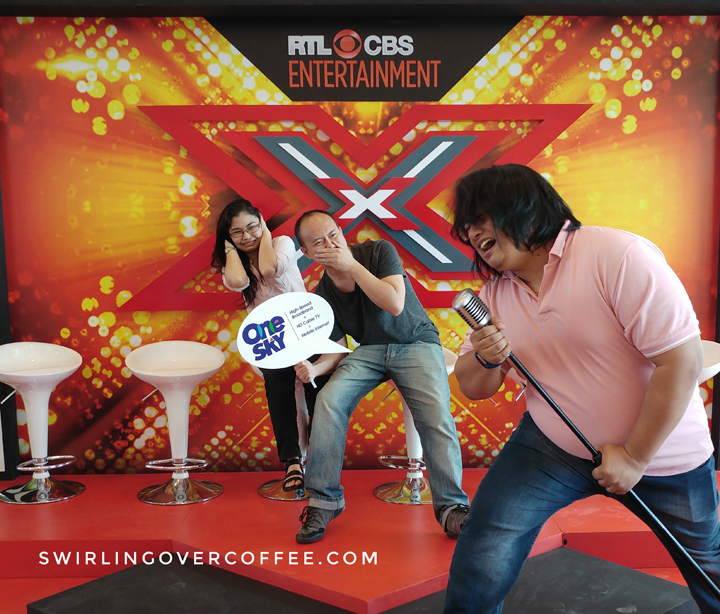 Friends. We love our friends, we support their dreams, and we’re honest about it.

Incredible front and rear cameras, questionable design decision. Awesome multitasking and gaming performance, poorly implemented modular feature. Unquestionably crisp, vivid, and vibrant display; average battery life. Priced like a premium flagship phone at launch, non-premium look and tactile feel. Despite these, we’re giving the LG G5 FOUR STARS. It’s spec’d to the teeth (except for the small 2800mAh battery) and no one can say the cameras are not superb. 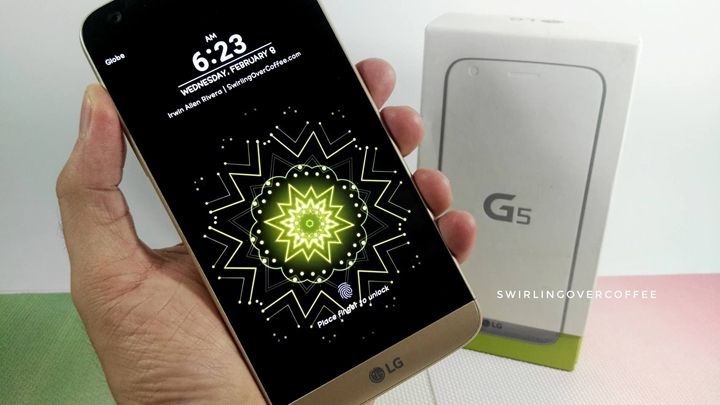 We also cannot stop raving about the close-to-natural colors, tons of details captured, reliability in all lighting conditions, fast auto-focusing, capture speed, great dynamic range, and spot on white balance adjustment of the rear cameras. Not to mention the highly detailed videos in both Full HD and 4K. That super wide angle camera is superb and so useful. The front camera can match or exceed even the best front cameras out there (even though that’s a feature not often discussed in G5 reviews). And we don’t care that the G5 isn’t water resistant. We just wish the battery could hang in there a bit longer.

Live More With the Reno3 Series: OPPO and Netflix Team Up For An Exquisite Viewing Experience