The LANDBANK Mobile Loan Saver (LMLS) once again breaks new ground with another first in digital banking as it ties up with the leading branded generics company in the country, RiteMed, for the Tamang Alaga TxTMED program: “Kapag kailangan ng gamot, dapat may gamot.” The pioneering and award-winning LMLS is powered by FINTQ, the financial technology arm of Voyager Innovations.
The Tamang Alaga partnership further expands the coverage of LMLS, allowing borrowers to allocate a portion of their approved net loan proceeds for the purchase of medicines. RiteMed, will make available a range of maintenance medicines at special discounted prices.

TxTMED, which will be available within the last quarter of the year, will enable government employees and private sector workers with payroll accounts with LANDBANK to seamlessly order and purchase medicines through their mobile phones, without the hassle of outright cash payment. The program, however, does not cover teachers, military and police personnel. Medicines ordered via LMLS will also be delivered for free in sealed packs to the concerned government agency or company office where the borrower is employed, within a week from the time of loan approval and release. 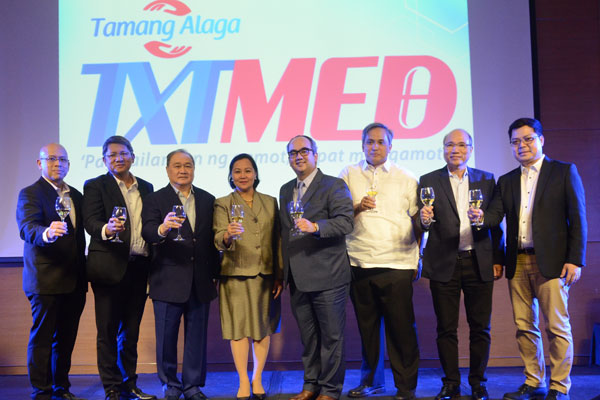 “We understand the financial burden of high medicine costs on many Filipinos, which is why through this initiative, we hope to provide LMLS borrowers with access to affordable and quality medicines. This is yet another showcase of the endless possibilities in terms of financial technology and digital lending, especially as we hope to reach out and provide financial and other services to more Filipinos across the country,” said LANDBANK Officer-in-Charge and Executive Vice President Cecilia C. Borromeo.

“Initially, over 700,000 government employees will benefit from the partnership of RiteMed with LANDBANK and Voyager Innovations’ FINTQ, an unprecedented collaboration of public and private organizations to champion the rights of the Filipinos to quality and affordable healthcare. The burden of coping with the daily cost of maintenance medicines, not to mention certain catastrophic diseases, have caused much physical, emotional and economic strains to Filipino families most especially to the public sector who have limited earning capacities,” says Vincent Patrick Guerrero, General Manager of RiteMed. “We are quite optimistic that with the technology of FINTQ and the nationwide network of LANDBANK, we would be able to fulfill the objective of RiteMed’s Tamang Alaga program of providing access to quality healthcare for all Filipinos.”

“Enabling digital technology ultimately levels the playing field where our underserved Filipinos with little or no access to quality and cheaper medicines would now have the chance to enjoy its benefits through our award-winning digital lending platform,” said Manuel V. Pangilinan, Chairman of Voyager Innovations and FINTQ. Both Voyager and FINTQ are digital innovation units of PLDT and Smart Communications.

This new partnership takes the LMLS to another level, following its successful roll-out among government employees, with loan releases amounting to over P12 billion as of August 2016 since it started. This has benefited more than 80,000 employees from over 1,200 participating agencies since the program’s commercial launch in January 2015.

The LMLS is now also telco-agnostic, making it available across all telco providers and has been expanded to include private sector employees. The inclusion of small farmers and fishers, microenterprises and SMEs, and Overseas Filipinos is also underway, making it more expansive to promote inclusive growth and digital financial inclusion.

“This is another first as we are helping provide access to healthcare through this digital channel. This is an initiative that promotes universal health care and social support access among Filipinos even at the grassroots, which is a basic human right,” said Lito Villanueva, Managing Director of FINTQ.

The LMLS has been recognized by the GSMA Mobile Money Programme as the first of its kind in the world for being a three-in-one mobile loan application service with auto-savings build-up features. It has also garnered seven global awards and recognition for the revolutionary and successful leverage of digital lending in an emerging market in less than two years. It has been featured by international publications as among the best practice models.

Level up the Passion: These celebrities elevate everyday with the Vivo V15 Pro