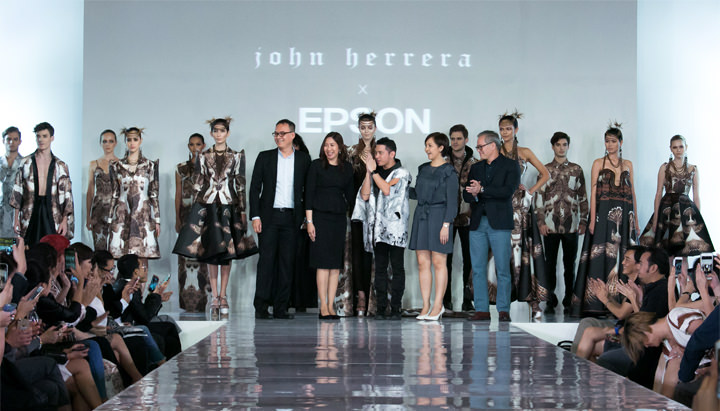 Manila, February 2017 – Fashion designer John Herrera (www.johnherreracouture.com) has partnered with Epson to produce a 30-piece collection digitally printed with Epson’s digital textile dye-sublimation printers. The collection for men and women is inspired by the Aguila, the protected Great Philippine Eagle, and was showcased at the recent London Fashion Week 2017.

The collection won John the position of Britain’s Top Designer 2017, a competition organised by Fashion’s Finest and held during London Fashion Week. John, based in Manila, Philippines,was also previously a winner at the London Emerging Designers (LED) Awards in 2015.

“This partnership with Epson is very exciting. There are so many things you can do with printing compared to just buying fabric. Before, all collections by designers were created painstakingly by hand. Many of the outfits, such as 3D items that are worn by the models can only be attached by hand, so what was presented on the runway cannot be worn again and again. With digital printing, the clothes in the collection can be worn in real life,” said John Herrera. “The collection I will be presenting will be impossible to create without the Epson digital textile printer. Without them I would have had to paint the designs myself and, with only a month to prepare, it could not have been done,” he added.

On his win at Britain’s Top Designer 2017 competition, he said, “The feedback from the judges was fantastic – particularly about the incredible quality of the fabric. One said that the eagle designs that I had drawn and printed were so clear and crisp they appeared almost 3D. Digital printing with Epson technology has enabled me to experiment with fabrics and choose the very best for my designs. It’s been a dream of mine – and most designers in fact – to be in control of the whole design process: from producing the fabric design, to choosing the fabric and printing it and creating the finished outfit. Epson has enabled me to realise this dream and I’m not going back now.”

John adopts a “no-waste, no plastic” approach and puts a lot of importance on reducing waste in his work. “With digital textile printing, we only use the exact volume of fabric. Instead of wasting five yards of fabric to do a lay out for a dress, we use only one and a half yards of digitally printed fabric. Digital textile printing significantly cuts fabric wastage. Faster, more intelligent, almost zero wastage – that’s what Epson brings to the table,” he said.

Epson’s digital textile printing technology is driven by the company’s PrecisionCoreprinthead technology, one of the fastest inkjet delivery technologies in the world. Its print nozzles deliver ultra-precise control of ink droplets for superior image sharpness across a wide range of ink and media producing outstandingly vivid and unique prints.

Digital printing shortens turnaround time and enables printing in small volumes for customised prints, compared to traditional printing techniques, which require high volumes and long lead times. As a result, digital printing helps designers such as John Herrera to achieve their artistic vision by translating their ideas to a range of fabrics quickly, easily and in the highest quality.

“Epson digital textile printing is inspiring more and more fashion designers to explore the creative and production potential that this technology enables. There is much potential in the region for digital textile technology to revolutionise the way designers work and create. With this, the designers are only limited by their imagination,” said Shuji Hamaguchi, Regional General Manager (SE Asia), Professional Printing Division, Epson Singapore.

“We would also like to congratulate John on his recent at Britain’s Top Designer competition. We are delighted to have the opportunity to support his achievement, and we hope that this inspires more fashion designers to make their vision into a reality,” he added.

Made in Japan, Premium, and Built to Last – Panasonic launches Refrigerator and Cuble Washer/Dryer