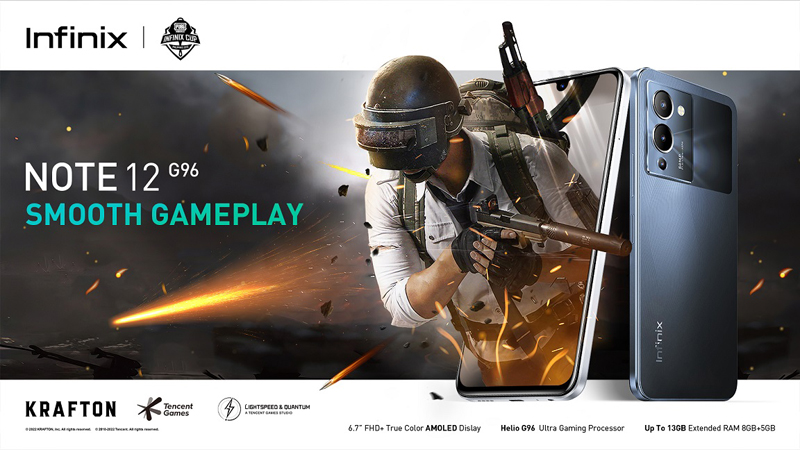 Infinix has announced a partnership with massively popular Player Unknown’s Battlegrounds (PUBG) and its newly-released NOTE 12 promising gamers hours upon hours of the smoothest gameplay experience that will test their skills and unleash their fullest gaming potential.

“Filipinos are some of the most passionate and skilled gamers out there and we, at Infinix, want to highlight that talent and the ever-growing E-sports community with this NOTE 12 partnership with PUBG,” said Infinix’s Marketing Head, Joseph Cernitchez. “From the limited edition PUBG packaging at launch, show matches with your favorite gaming influencers, to a nationwide PUBG tournament, we have so much in store for everyone that will show gamers  why the NOTE 12 is the ultimate gaming phone.”

PUBG is an online multiplayer battle royale shooting game released in 2017 by PUBG studios. Inspired by the film Battle Royale (2000), the game follows how up to 100 players get parachuted onto one of several maps and how they manage to scavenge for weapons and equipment to eliminate the other players and win the round by being the last man–or team–standing.

As part of the Infinix x PUBG partnership, Infinix launched a limited edition PUBG box and case exclusively for the NOTE 12 G96.

Infinix and PUBG will also be holding a nationwide PUBG tournament that seeks to gather the best players and teams across the Philippines in a series of battle royale showdowns. They will also bring together some of the renowned mobile gamers in an All-Star game during the tournament.

In the meantime, while you’re gathering your team for the Infinix x PUBG Mobile Cup, view the NOTE 12 in action at Infinix’ official website.

Experience the best mobile gaming experience with the MediaTek Helio G96 Ultra Gaming Processor providing more speed and power to the NOTE 12. The chipset is a 64-bit octa-core that incorporates two powerful Arm Cortex-A76 and six Arm Cortex-A55 processor cores clocked up to 2.05GHz and Arm Mali G57 GPU that work together to harness next-level intelligence for groundbreaking performance.

Casual and heavy gamers alike will find that no game is too heavy for the NOTE 12. Infinix expands the NOTE 12’s 8GB memory to 13GB by integrating RAM and ROM to provide users with up to 5GB extended RAM. This improves the smartphone’s processing speed and accelerates performance when users are using their smartphone to multi-task by delivering extra power when it’s needed.

The NOTE 12 is also one of the thinnest smartphones at 7.8mm that comes equipped with a 33W Fast Charge feature, and a huge 5000mAh making this lightweight smartphone more portable than ever while staying powered all day long. So gamers need not worry if they have enough juice while training and even competing.

Beyond gaming, photography enthusiasts will also love the 50MP Ultra Night Triple Camera, which can take clearer night pictures, and its large AMOLED screen with blue light technology. The Note 12’s screen features the brightest colors on an eye-friendly display that gives the best performance in contrast ratio and color calibration in 1080×2400 pixels resolution.

Want to test your shooting skills and mettle against some of the best PUBG players in the Philippines? Watch for the Infinix x PUBG Cup–see how the Infinix NOTE 12 gives you that smoothest gameplay experience for you to reign supreme and your team may just get the chance to win the massive prize pool!

Learn more about the Infinix Cup and register your team by visiting Infinix Facebook Page. The NOTE 12 is available in Force Black, Sapphire Blue, and Snowfall in 128GB and 256GB for P8,990 and P9,990, respectively at Infinix stores nationwide, via Shopee. For more information, visit http://www.infinixmobility.com/.

Know Your Equipment: Proper Installation and Commissioning is Essential to Machine Reliability