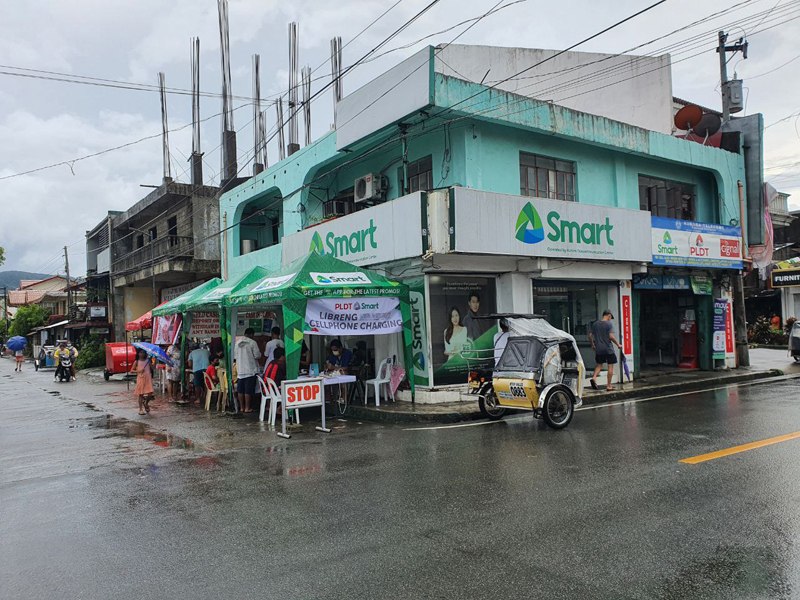 The onslaught of supertyphoon Karding in Central Luzon left the municipality of Baler in Aurora without power. While everyone else was busy checking damages from the huge storm that passed, Baler community leaders and Smart business partners Lydia and Arnel Querijero were busy setting up tents and tables for the free charging station beside their telecoms store on Bitong street.

“We are grateful because when we told our contacts in Smart that we can set up a free charging station today, they supported us by providing the fuel for the generator. You see those signages, the banners? We keep them every time they send us one, so that we can reuse them during times like this,” Querijero shared.

Veterans in the telco industry, the husband-and-wife team of Aurora Telecoms has been provincial distributors of Smart for 14 years. “Smart Tawag Center pa noon! We started with that actually, wala pang cellsite [dito] noon,” she quipped. As people flocked the tents to charge their dead phone batteries and power banks, Lydia and her husband even extended the station, putting up more tents and even borrowing tables from a nearby restaurant, and chairs from the barangay. “They saw that it was for free for the community, so they are willing to help.”

Retailers and distributors like Lydia have become frontliners of Smart during disaster response efforts so that the telco can immediately deploy communications as aid in affected areas, as well as other forms of support. From setting up free calls and charging stations to providing the company with “at-the-moment” reports that enable the telco to quickly respond to the needs of its customers.

When asked about the response of the community, Querijero smiled. “They are happy. The head of the risk reduction office here in Baler even shared our post about our free charging station.”

“It’s as if this has become an institution of sorts, that if there’s a blackout after a disaster, they know where to go to charge their phones, they know that Smart is here for them,” Querijero said. “Buhay na namin ‘to, kumbaga hindi lang in terms of hanapbuhay; it has become a chance to give back to the community,” she added.

The telco’s fixed and wireless network in the province of Aurora were fully restored last Wednesday.

Win a Ford EcoSport, P10000 worth of items with vivo Christmas promo