Globe spending on network infrastructure one of highest in Asia


Devotes up to 24% of annual revenues for infra build, indicates proactive efforts to upgrade network capacities

Globe Telecom posted one of the highest capex-to-revenue ratio in the last two years showing how aggressive the telecommunications provider has been in upgrading and enhancing its network infrastructure. 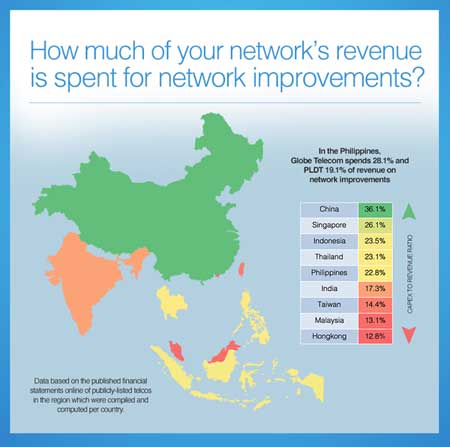 “Over the past several years, we have invested in our network to enable our customers to enjoy their digital lifestyle and empower businesses with digital capabilities, enhance their productivity and make globally competitive,” Globe President & CEO Ernest Cu said. “We are moving to enhance the internet experience of the Filipino people and position ICT as a major development contributor in the Philippines,” Cu added.

In 2011, Globe embarked on a $700 million network modernization program that provided among others the adoption of latest telecommunication technologies for seamless customer experience and increased data capacities. The modernization initiative, completed in 2014, delivered the most advanced network infrastructure in the country, putting in a brand new access, transport, and core network nationwide. As part of the initiative, the company also completed a nationwide rollout of 4G network, using the HSPA+ technology. Since 2011, Globe has invested over $2.2 billion in its network and IT infrastructure to enhance the telecommunication provider’s data network capacities.

In November 2015, Globe signed a five-year partnership deal with Huawei Technologies in a bid to further enhance and expand the provider’s mobile network. The partnership involves planning and design of a mobile broadband network utilizing latest state of the art technology trends. The project also involves the creation of a “mobile innovation center” to yield innovative products and solutions that would ensure Globe maintains its competitive edge and leadership in the intensely competitive local telecommunications industry.

To effectively roll-out its network capacity building program, Globe is seeking Open Access legislation for the telecommunications industry to help mitigate bureaucratic red tape and other political hurdles that stand in the way in the deployment of telecommunication and broadband infrastructure.

Cu emphasized that rationalization of permitting processes in deploying of ICT-related infrastructure is necessary to help the Philippines grow its Internet backbone so that local businesses will remain competitive amid rapid digitization of industries. Specifically, such legislation would expedite the issuance of all the relevant permits for all telecommunications facilities at the local government level. Telecommunication companies are required to secure a number of permits that could substantially delay deployment of ICT-related infrastructure.

Globe is also clamoring for the equitable distribution of the 700 MHz frequency spectrum to sufficiently provide for rapidly increasing data traffic amid growing smartphone use in the country.