Escalating work privileges: 64% of employees who argued with the IT department about updates were allowed to use their current versions

Globe disconnects from service close to 30,000 numbers identified as source of spam/scam messages

Globe Telecom has disconnected from service close to 30,000 prepaid numbers found to be consistent source of spam and scam text messages as the leading mobile operator continues to intensify efforts to eliminate such unsolicited and annoying messages.

The numbers blocked from the Globe network were subject of complaints reported through the http://www.globe.com.ph/stopspam where customers are simply required to provide all the details of spam and scam messages they received on their mobile devices. Numbers that are reported to be a constant source of spam messages are then disconnected from service.

The numbers were also identified via an automated filtering system implemented by Globe to keep its customers from receiving scam and spam messages. The telecommunications provider recently expanded the coverage of this functionality and the system now covers majority of the company’s 2.3 million postpaid customers. 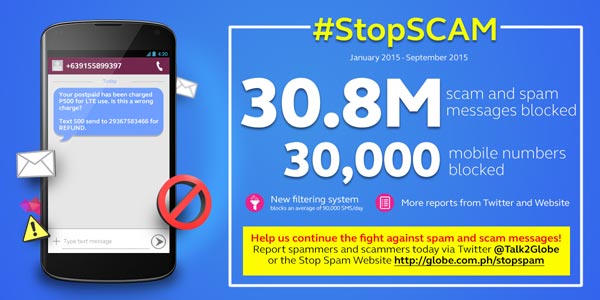 “Globe will never allow the use of its network by individuals who want to take advantage of our customers. As Globe steps up its campaign to purge its network of spam and scam messages, we expect this number to increase further moving forward,” Bonifacio said.

Following an information drive launched early last year to educate its customers on how to deal with irritating text spams, Globe also operationalized a filtering mechanism that keeps customers from receiving scam/spam messages.

So far, Globe already blocked a total of 30.8 million of spam and scam text messages. The system prevents the transmittal of scam messages to mobile devices, has substantially reduced the number of text scams/scams going through the Globe network. The volume of messages blocked by the network filtering system averages about 90,000/day, reaching a peak of around 200,000 in July this year. The filtering mechanism can be reconfigured to address the kind of spam and scam messages that goes through the Globe network. Recently, bulk of spam and scam messages delivered to Globe customers originate from sim cards of competition (with prefixes 0922, 0943). Mobile customers of Globe Telecom reached 48.4 million at the end of the first half, a 13% rise from 42.7 million a year earlier.