“As the global leader in sports fuel, Gatorade is a prestigious brand that is associated with many of the world’s premier athletes, teams and leagues, so this new partnership is a natural fit,” said Guy-Laurent Epstein, UEFA Champions League’s SA Marketing Director. “Gatorade has been researching and developing its products for the past 50 years, and we are looking forward to using the products and services, as well as the scientific knowledge they can offer our medical experts and players.” 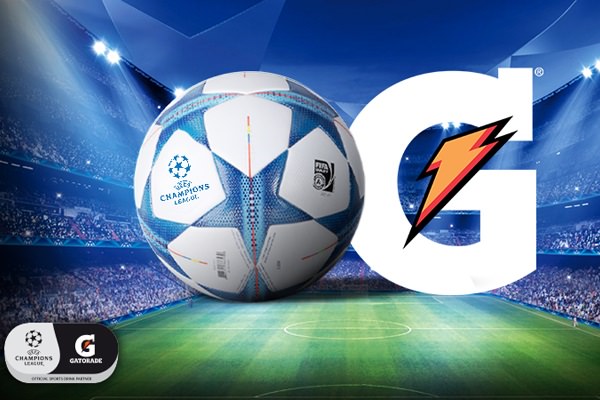 By aligning with the sport’s most prolific athletes, Gatorade continues to expand its growing reach in global football. It is currently the official sports fuel partner for more than 50 football clubs across 12 countries worldwide, including the Brazilian men’s national team, prominent clubs Arsenal F.C., Liverpool F.C., FC Barcelona and Juventus F.C.

“The UEFA Champions League features the most elite players and clubs in global football. Through our new partnership, we hope to help improve the performance of these premier footballers while expanding awareness of our commitment toward fueling football players and aspiring athletes around the world,” said Brett O’Brien, Gatorade’s general manager and senior vice president. “We look forward to bringing our research-backed sports fuel solutions and services, as well as our sports science knowledge to the participating teams and players.”

The UEFA Champions League Final is the world’s most watched annual sporting event. The final on Saturday (June 6, 2015) was aired in more than 200 countries, reaching an estimated 400 million viewers, with an anticipated average live match viewership of 180 million. The season from the Play-Offs to Final runs over 17 match weeks with a total of 145 games. The league provides more than 110,000 hours of TV content over a season and audiences are significant regionally and globally, with 1.1 billion unique viewers of live match coverage worldwide.

About Gatorade
The Gatorade Company, a division of PepsiCo (NYSE: PEP), provides sports performance innovations designed to meet the needs of athletes at all competitive levels and across a broad range of sports. Backed by more than 40 years of studying the best athletes in the world and grounded in years of hydration and sports nutrition research at the Gatorade Sports Science Institute, Gatorade provides scientifically formulated products to meet the sports fueling needs of athletes in all phases of physical activity. For more information and a full list of products, please visit www.gatorade.com.

About PepsiCo
PepsiCo products are enjoyed by consumers one billion times a day in more than 200 countries and territories around the world. PepsiCo generated more than $66 billion in net revenue in 2014, driven by a complementary food and beverage portfolio that includes Frito-Lay, Gatorade, Pepsi-Cola, Quaker and Tropicana. PepsiCo’s product portfolio includes a wide range of enjoyable foods and beverages, including 22 brands that generate more than $1 billion each in estimated annual retail sales.

At the heart of PepsiCo is Performance with Purpose – our goal to deliver top-tier financial performance while creating sustainable growth and shareholder value. In practice, Performance with Purpose means providing a wide range of foods and beverages from treats to healthy eats; finding innovative ways to minimize our impact on the environment and reduce our operating costs; providing a safe and inclusive workplace for our employees globally; and respecting, supporting and investing in the local communities where we operate. For more information, visit www.pepsico.com.

Have the jolliest holiday with Lancaster New City’s Christmas events and activities!

Top 3 reasons why a Dashcam is an Essential Car Accessory

A Furtastic Valentine’s Day from BGC