Dyson, renowned UK brand, is now in the Philippines

Solving the problems that others ignore.

The entrepreneur and inventor behind British technology company Dyson has a simple motto: “I just want things to work properly”. This principle has driven the company through 20 years of invention.

Frustrated with the performance of his bagged vacuum cleaner, James took it apart to find the problem. He realised that dust and debris were clogging the pores of the bag and causing the machine to lose suction.

James decided to find a better way. Inspired by the filtration system at a local saw mill, he developed cyclone technology. Cyclonic vacuum cleaners use g-force to pull dust particles from the airflow rather than relying on bags to trap dirt.

Since inventing the first bagless vacuum cleaner in 1993, James and his engineering team have been continually developing and refining it. Dyson added a group of smaller cyclones generating higher g-forces; the smaller the cyclone the faster the air spins, separating more microscopic dust.

Our latest machine, DC46, has two layers of smaller cyclones working in parallel to increase airflow. It can separate particles down to 0.5 microns – 200 times smaller than a single strand of hair.

After taking on the challenge of designing a powerful motor that could fit in the palm of your hand, Dyson engineers were able to adapt cyclone technology to create a handheld cordless machine.

Most cordless machines put the heavier components, such as the battery and the motor, at the base of the machine. This makes them hard to lift and limits them to floor cleaning.

Dyson engineers used the Archimedes level principle, putting the compact Dyson digital motor in the palm of the hand. This makes it easy to clean up top and around your home using a range of attachments, as well as floor cleaning. 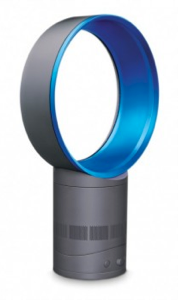 Conventional fans use fast-spinning blades to chop the air, causing uneven buffeting. The Dyson Air Multiplier™ fan has no blades. Instead it uses Air Multiplier™ technology to amplify air 15 times, expelling 405 litres of cool, smooth and uninterrupted air every second.

It uses an impellor to draw air in to the base, which is then accelerated up into the loop. The air is pushed out of an annular aperture creating a high-pressure jet of air. Surrounding air is drawn into the airflow from behind and to the side of the fan multiplying the airflow: for every one litre of air taken in to AM01, 15 litres are pumped out.

Dyson over the years