“Our country deserves all the loyalty and devotion we can give. I beseech you to summon all the big and noble in you, all that is earnest, all that is patriotic, all that is sincere, to help set a pattern of sanity and constructive action in these days of bitterness and political bewilderment.” – President Elpidio Quirino 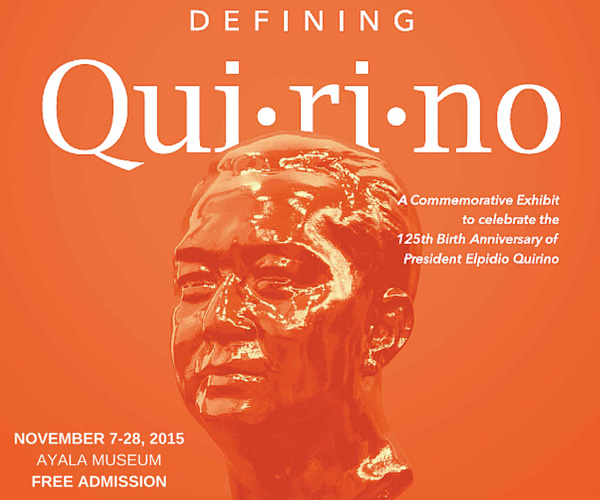 These are words from former President Elpidio Quirino – words that are still very relevant today. On 16 November 2015, the nation celebrates the 125th Birth Anniversary of Quirino, the 6th President of the Philippines, who rebuilt a Philippines devastated by war. Today’s Filipinos continue to benefit from President Quirino’s legacy, which includes the Minimum Wage and 8-hour Work Laws, Social Security System, and standardization of teacher’s salaries, among many others. He is also remembered for granting asylum to 6,000 “White Russian” refugees in 1948.

To celebrate the man, a commemorative exhibit will run from 7-28 November 2015 at the Ayala Museum, Makati City. Largely drawn from the Filipinas Heritage Library and the President Elpidio Quirino Foundation’s rich collection of papers and memorabilia, Defining Quirino highlights stories of one statesman’s journey from teacher to president, his vision and achievements, and his deep sense of humanity encapsulated in Tolerance, Goodwill, and Love. Designed to resemble a dictionary, the exhibit features words associated with Quirino and gives their meaning through vignettes of his life and legacy. The exhibit will also feature a tribute wall of 125 portraits of the President, contributed by 125 artists, friends, and family in honor of Quirino, a self-made man from humble beginnings.

A series of events will also be held on all Saturdays of November: A lecture by Usec. Manuel Quezon III during the exhibit opening on November 7; a talk by former White Russian refugee Natalie Sabelnik, and a concert featuring Russian Folk Singer and former refugee Nikolai Massenkoff with the Manila Symphony Orchestra on November 14; a lecture by renowned historian Ambeth Ocampo on November 21; and the book launch of Elpidio and Alicia: The Love Letters on November 28.

Defining Quirino is presented by the President Elpidio Quirino Foundation, Inc. with Filipinas Heritage Library and Ayala Museum; in partnership with Samsung Philippines; and in collaboration with the National Historical Commission of the Philippines, The National Commission for Culture and the Arts, and The Public School Manila. This exhibition at the 2nd floor of Ayala Museum is free and open to the public. Group tours to the exhibit are also available upon request.

Your next post about art could win you P450,000 #ArtLotto

How Storage Designed for Surveillance Improves the Entire System