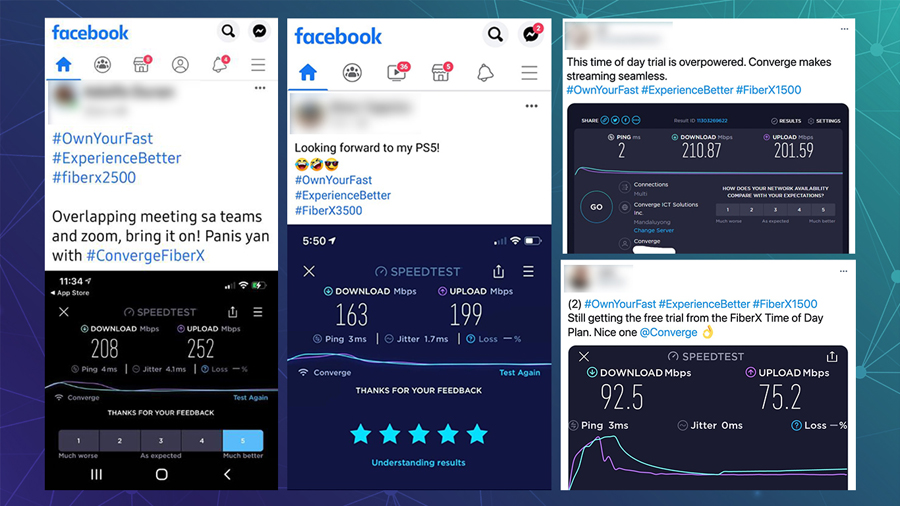 The average download speed of Converge ICT Solutions Inc., the country’s only pure fiber broadband provider, was 47% faster from 28.88 Mbps in Q4 2020 to 42.43 Mbps in Q1 2021, according to the latest Speedtest Intelligence® data from Ookla®.*

Ookla also recently verified that Converge delivered the most consistent network performance among fixed broadband providers in Metro Manila, Calabarzon (Cavite-Laguna-Batangas-Rizal-Quezon), Ilocos, Central Luzon, and the Cordillera Administrative Region in the first quarter of the year.**

“Our end-to-end pure fiber technology allows us to provide our subscribers with the fastest and most consistent speeds in our standard plans,” said Converge COO Jesus Romero. Converge standard plans start at 35 Mbps for only P1,500 a month

Based on analysis by Ookla, Converge garnered the highest Consistency Score™ among providers in the five regions, including Metro Manila. Ookla’s Consistency Score measures what percentage of a provider’s samples equals or exceeds both a download and upload fixed threshold.

Romero also said that Converge results showed an average latency rate of 13 millisecond (ms) based on thousands of consumer-initiated tests taken with Speedtest®. Latency or commonly called ping refers to the reaction time of your connection, from how quickly your device gets a response after a request has been sent.

Converge CEO Dennis Anthony Uy noted that Converge has been aggressively expanding its all-fiber network to provide world-class internet connectivity to the broader number of Filipinos. Latest data show that only around 11% of the Philippine population has access to fiber internet which is used by the top countries in Ookla’s Global Index Market Analyses ranking such as South Korea and Singapore.

Converge has recently connected the Visayas and Mindanao to its national fiber backbone as it aims to reach 55% of total Filipino households by 2025. As of end-2020, the fiber network of Converge has reached over six million homes or 25% of the population.

* Based on analysis by Ookla® of Speedtest Intelligence® data for average download speeds in the Philippines Q4 2020 – Q1 2021. Ookla trademarks used under license and reprinted with permission.

** Based on analysis by Ookla® of Speedtest Intelligence® consistency scores in specific regions for Q1 2021. Ookla trademarks used under license and reprinted with permission.

Andrea Brillantes and gamer AkoSi Dogie face off in the most epic Rap Battle in Mobile Legends History for the 515 E-party celebration!