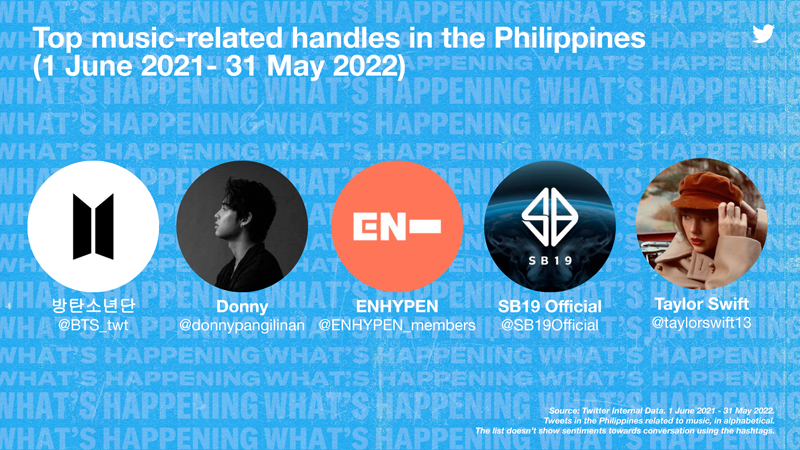 MANILA, 21 June 2022 – This World Music Day happening on 21 June, Twitter is bringing back #TweetYourMusic campaign to highlight local musicians and music communities across Southeast Asia. The music community of music lovers alone contributed to 4.3 Billion conversations on Twitter from June 2021 through May 2022 across Southeast Asia. This was a 21% YoY increase from the year before; with the most conversations coming from Indonesia, the Philippines, and Thailand.

Twitter is where people go to form passionate communities, have conversations with others with common interests and passions, and find out #WhatsHappening. From sports to entertainment, culture to current affairs, Twitter is where like-minded creators and fans can stay connected, no matter which part of the world they are in and no matter what occasion it is. And of course, music was one of the vibrant communities that have been thriving on Twitter.

In the Philippines, there were almost 1.4 Billion Tweets around music, as Filipinos enjoy jamming to the hits like ‘Stay’ (The Kid LAROI and Justin Bieber) and ‘Zoom’ (Jessi) which dominated the charts (and were belted out in our showers). P-pop boy group SB19 (@SB19Official) also stayed at the top and Donny Pangilinan (@donnypangilinan) continues to set the trend thanks to Filipino fans who unceasingly show their support on Twitter.

The past year has also been busy for Filipino singer-songwriter, and producer Zack Tabudlo (@zacktabudlo) for releasing hit songs like ‘Pano’, ‘Asan Ka Na Ba’, and ‘Habang Buhay.’ Ben&Ben (@BenAndBenMusic), an award-winning 9-members band in the Philippines, was also busy doing collaborations with different local artists and bands like Munimuni, Zild Benitez, and Moira Dela Torre among others. Not mentioning the release of their album, ‘Pebble House, Vol. 1: Kuwaderno.’

Kpop continued to be the all-time music genre that generated the most chatter on Twitter, with BTS, Enhypen, and Blackpink being the top three. BTS (@BTS_twt), takes the spot in the top music-related handles in the Philippines – with the band’s on-site concert ‘BTS PERMISSION TO DANCE ON STAGE’ in Korea and in Las Vegas followed by the release of its comeback album ‘Proof.’

Filipino music fans on Twitter also showed their support for their favorite K-pop and P-pop bands, and international and local artists through hashtags. Here are the top hashtags related to music in the Philippines:

“Now more than ever, people crave connection with one another and Twitter has helped bridge the gap among fans and also between artists and fans. With 4.3 billion Tweets on Twitter in Southeast Asia around music alone and 1.4 billion in the Philippines, music is a unifying force that connects people across the region,” says Carl Cheng – Head of Entertainment Partnerships, Southeast Asia and Greater China, Twitter.

#TweetYourMusic will celebrate local musicians, their journey, and the fans that support them with a series of fun and creative activities on Twitter. Across Southeast Asia; different fan bases will have the opportunity to participate in daily music trivia through Twitter Polls, and get to hear some of their local musicians’ journeys and inspirations live on Twitter Spaces:

In the Philippines, there will also be fun activities throughout the week of World Music Day, such as music polls. From casual listeners to dedicated stan, everyone can join in! With Twitter Topics, fans can easily find the conversations that mattered most to them – be it the latest collaboration between Adie (@Adadieee) and Janine Berdin (@janineOTOT) for ‘Mahika’, Ace Banzuelo (@acebanzuelo) slaying the charts with ‘Muli’, or the newest cover drop of Gigi De Lana (@GigiDeLana).

Stay tuned to #TweetYourMusic this World Music Day and participate in the fun activities we have planned. Follow @TwitterPH to be part of the conversation.