Home > Tech > Building the nation one teacher at a time

Building the nation one teacher at a time

Nine years ago, a small group of like-minded PLDT executives banded together over coffee for an advocacy for teachers. With a common dream of being a catalyst of change in the lives of teachers, Gabay Guro was born and became the CSR arm under the PLDT-Smart Foundation.

What transpired after that fateful day revolutionized education-based advocacy efforts in so many levels giving birth to a holistic approach that was anchored on the now famous Gabay Guro pillars – Scholarships, Trainings, Housing and Educational Facilities, Livelihood Programs, Broadbanding and Computerization, and Teachers’ Tribute.

Gabay Guro managed to write off mediocrity since then, championing excellence and paying tribute to teachers all over the country (and nearby countries) by bringing attention to their heroic deeds and at the same time, providing them with the necessary tools to contribute to the change in the lives of their students and their families.

To this day, Gabay Guro managed to thrive on volunteerism – mostly among the ranks of the executives from PLDT and Smart.

The foundation has conducted trainings for over 16,000 teachers in the course of its nine years. Today, it runs eight training programs for teachers around the country namely: Teacher’s Treasure Chest; English Proficiency Training; Computer Literacy; Emotional Intelligence; Teacher’s Armor; Leadership Training; IT Sustainability and Literacy; and Unleashing Creativity in Teaching. At the same time, Gabay Guro answers to the needs of the times by doing grassroots anti-drugs trainings in schools.

Gabay Guro’s initiative on Broadband and Computerization has had great impact nationwide. All partner-schools were recipients of either computers/laptop or internet connections from PLDT or Smart.

Knowing that shortage of educational facilities is a major disaster area in the Philippine education system, Gabay Guro has taken the cudgels in the construction of classrooms in the provinces, mostly those that have been hit by debilitating calamities. There is over 40 classrooms constructed and donated already in the ff. provinces: Cebu, Bohol, Leyte and Capiz.

Gabay Guro has grown to be the force that it is today. Whereas in the beginning, there were only a couple of thousand member-teachers under its stable, 2016 sees 20,000-strong membership (and growing!) at its helm and has easily taken over the leadership, the one that sets the bar of service, in all education-related NGOs around the nation. 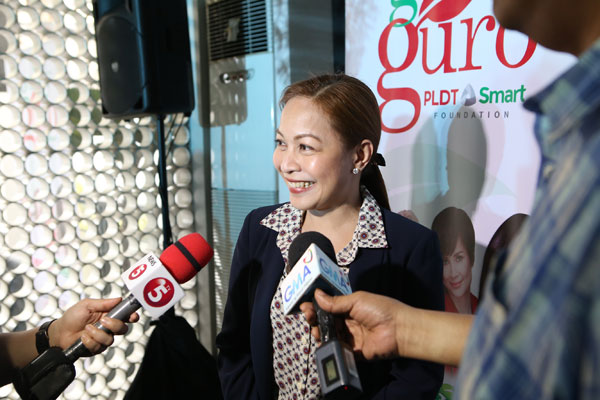 PLDT Gabay Guro executive volunteer Chaye Cabal-Revilla shares what to look forward to in the 9th TeacherFest tribute on September 25.

Ms. Chaye Revilla and the Gabay Guro team of visionaries with her in the foundation, were propelled by this belief: “our nation’s children depend on our nation’s teachers to lead them to the future. And this teachers’ month, Gabay Guro gives tribute to those who teach the next generation of nation-builders.”

The pinnacle of Gabay Guro’s celebration is embodied in the tribute event held every year at the MOA Arena. Year after year, the organizers leave no stone unturned ensuring that it is in Gabay Guro where teachers get to be treated like royalty. Generosity at its finest, raffle prizes have grown to be the staggering house and lot and vehicle showcases and livelihood opportunities that they are today in every Gabay Guro tribute event.

The Gabay Guro’s 9th Teacher’s Tribute this year, the biggest gathering of the country’s celebrities, will not disappoint on Sept. 25 at the MOA Arena. Stellar names set to give the teachers the time of their lives on this day are Regine Velasquez, Ogie Alcasid, Gary Valenciano, Pops Fernandez, James Reid, Nadine Lustre, Ms. Lea Salonga and Mega star Ms. Sharon Cuneta and more surprise guests on the big day.

This is the day where our teachers get to let their hair loose, meet the biggest celebrities, be treated to a whole day of entertainment and huge raffle prizes beginning with house and lot and vehicles., anything to remind them of their invaluable presence in our lives.

From Booking Virtual Fitness Classes to Shopping For Cars & Motorcycles: 7 New Things You Can Do Using The Lazada App

Be Ready for SY2015 with the Right Tools from Smart Bro