BIOSTAR has released the latest mainboard, based on the exclusive A70M chipset from AMD, the TA70U3-LSP, which offers LAN Surge Protection built directly into the board. The TA70U3-LSP supports FM2+ APUs, USB 3.0 and SATA3. AMD A70M chipset (exclusive from BIOSTAR) supports USD 3.0 and SATA3, it becomes the best upgrade option of current entry level A58 chipset boards. 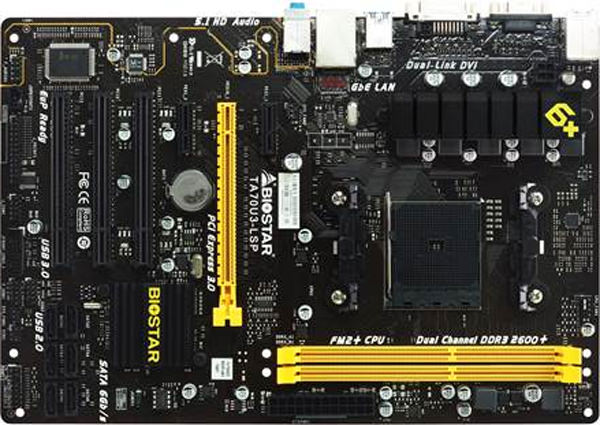 The TA70U3-LSP is based on the AMD FM2+ socket design that will support AMD Multi-Core (x4, x2) socket FM2+/FM2 processors AMD A-series/ E2-series processors all in a full-sized ATX form factor. It has 3 PCI slots and 2 DIMM slots supporting up to 32Gb of DDR3 ram and uses the newest SATA 6Gb/s bus which is twice the speed of current SATA 3G connections with 6 SATA connectors along with USB 3.0. There is also support for AMD Dual Graphics Technology, as well as support for full HDMI 3D 1080p.

Additionally, the TA70U3-LSP has LSP which stands for Lan Surge Protection. This is done by adding an integrated chip, directly into the board to strengthen electrical stability and prevent damage from lightning strikes and electrical surges. Electronic systems can be damaged or destroyed by electrical surges. These are voltages which are much greater than the normal working voltage and which appear in a system for a short period of time.

BIOSTAR wants to insure that the motherboards have a high degree of protection from such surges by the use of hardware devices, directly built into the motherboard, which limit surge voltages reaching protected equipment to safe levels.

Nailed it - 6 Features the ASUS ZenFone 2 Got Right

The Epson Story on Innovation Continues