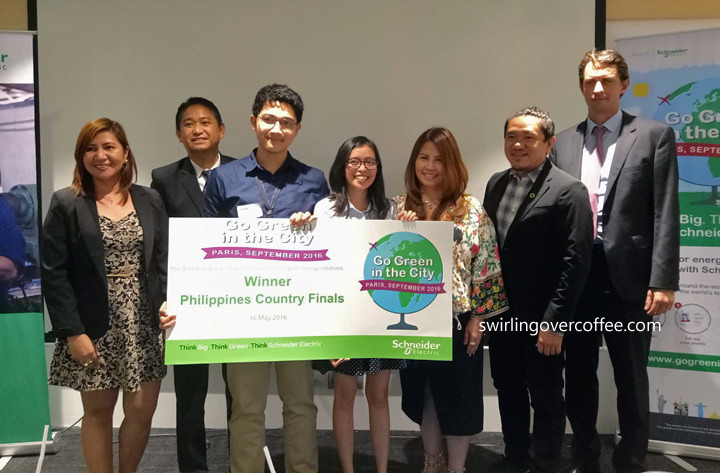 The winning proposal is a device that harvests solar, wind, and vibration energy while monitoring air quality and filtering it.

The team of Prince Aldrin Domer and Sheena Fernandez, both Ateneo De Manila (ADMU) Electronics and Communications Engineering (ECE) students, bested 3 other teams from UP Diliman at the Go Green In The City 2016 Philippine Country Finals last May 16, 2016. Team Ateneo Ohm’s winning proposal is AeoLuminate, a device that harvests energy (solar, wind, and vibration), monitors air quality, and filters the air. The winning team took home the PhP 100,000 grand prize and will represent the Philippines at the Go Green in the City 2016 East Asia Regional Semi-Finals on June 10, 2016.

“[Aeoluminate] envisions a step forward in addressing the challenges posed by unpredictable weather conditions to existing standalone renewable technologies, as well as the increasing need for better data on air quality for monitoring and policy-making purposes in the face of increasing greenhouse gas emissions,” Domer said. He added that the entire system powers itself, is ideal for off-grid street-lighting, and is scalable. The idea is to install the device on top of streetlamps where it can power the streetlamp, collect air-quality data, and improve air-quality with a three-stage filtration system.

Two Philippine teams have made it to France in previous editions of Go Green, the most recent ones being John Paul Santos and Christian Sta Romana of the Polytechnic University of the Philippines who got second runner up in the 2015 Grand Final for their Electrifilter device. The device generates electricity from dirty water as it gets filtered and cleansed. In 2013, Lorenzo Payonga and Alyssa Vintola took home the Grand Prize with the Oscillohump, a device that collects energy from vehicles going through speedbumps. All the previous winners, save for Sta Romana who is set to graduate next year, are currently employed by Schneider Electric Philippines.

For more information on Go Green in the City, please visit their website at http://www.gogreeninthecity.com.

Huawei launches “P6 mini” with exciting freebies on May 31

Watch out for Brother’s ‘Scratch and Win’ roadshow promo, tradeshows