ASUS today announced that it will Outshine the Competition with Aura Sync, the world’s first RGB-lighting-synchronization feature that is compatible with a broad range of PC components and peripherals, from motherboards and graphics cards to keyboards and mice — including many developed by popular third-party hardware manufacturers. 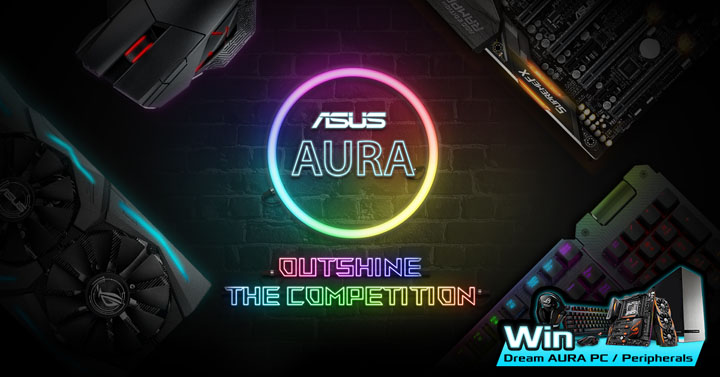 ASUS will promote the Aura Sync platform with the Outshine the Competition campaign. We are inviting fans from anywhere in the world to submit Aura Sync-inspired photos compositions in order to win great prizes — including all kinds of Aura products, including new Aura Sync motherboards and an Aura Sync-enabled dream PC package.

Existing owners of Aura products should take a photo or a video of their gear in action and submit it to the competition website, at https://www.asus.com/campaign/aura/global/campaigns.html. Those yet to treat themselves to Aura Sync kit are still able to enter, by creating an Aura Sync-inspired photo montage that features the Aura Sync logo. Entrants must also post their creations to at least one popular social-media channel, using the hashtag #ASUSAura. All participants have the chance to win prizes, including those voting for other entrants. Full competition rules and conditions are available on the competition website

Many ASUS and ASUS Republic of Gamers (ROG) products are already equipped with Aura RGB lighting and to ensure the best compatibility, ASUS has also teamed up with well-known RGB strip-makers and case manufacturers, including CableMod®, IN WIN, DEEPCOOL®, NZXT™, BitFenix®, Phanteks EKWB and SilverStone — helping gamers to light up easily wherever they see the Aura Sync badge.

The Aura Sync platform is already growing rapidly, with many more ASUS and ROG Aura Sync-capable products[1] scheduled for release in the next few months.

[1] Synchronization is controlled by compatible ASUS and ASUS ROG motherboards, via the onboard Aura Sync header.

Twitter, Globe, and Smart to Provide Daily Entertainment Updates to over 120 Million Mobile Phone Subscribers in the Philippines

Allergy-free 2017 With Claritin: #TrustTheExpert in Anti-allergy