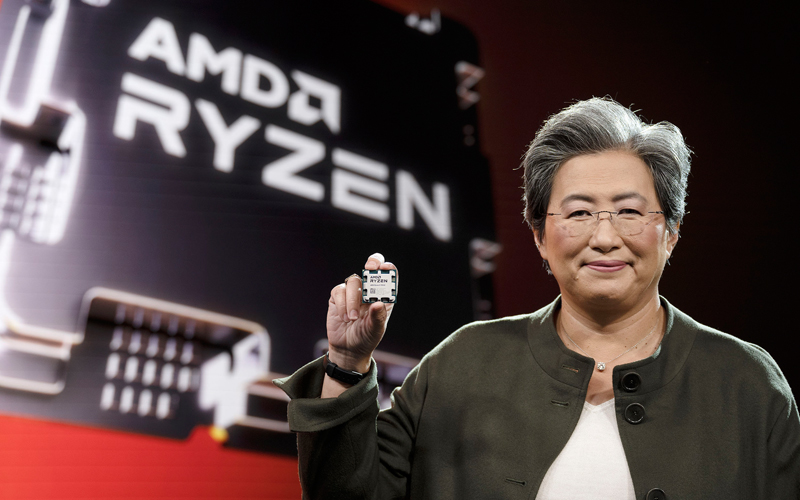 Today, AMD (NASDAQ: AMD) revealed the Ryzen 7000 Series Desktop processor lineup powered by the new “Zen 4” architecture, ushering in the next era of high performance for gamers, enthusiasts, and content creators. Featuring up to 16 cores, 32 threads and built on an optimized, high-performance, TSMC 5nm process node, the Ryzen 7000 Series processors deliver dominant performance and leadership energy efficiency. Compared to the previous generation, AMD Ryzen 7950X processor enables single-core performance improvement of up to +29%, up to 45% more compute for content creators in POV Ray, up to 15% faster gaming performance in select titles, and up to 27% better performance-per-watt. AMD’s most expansive desktop platform to date, the new Socket AM5 platform is designed for longevity with support through 2025.

Ryzen 7000 Series Desktop processors are expected to be available globally from leading etailers and retailers beginning September 27, starting at an SEP of $299 USD.

With the introduction of the Ryzen 7000 Series Desktop processors, AMD also unveiled the new Socket AM5 platform, offering cutting-edge connectivity features like dual-channel DDR5 memory. The AM5 platform also includes up to 24 PCIe® 5.0 lanes, making it AMD’s most expansive desktop platform to date. Support for new and evolving technologies like PCIe® Gen 5 and DDR5 memory empowers users to grow with their Socket AM5 solution, which AMD will support with platform longevity through 2025 and beyond.

New motherboards will be available starting at an SEP of $125 USD, with the AMD X670 and X670E chipsets arriving in September, and AMD B650E and B650 chipsets in October.

AMD EXPO technology was designed to achieve higher gaming performance from pre-configured overclocking profiles and is easy to implement. PC enthusiasts who want to understand the finer details of an AMD EXPO technology-enabled module can find public self-certification reports, which clearly lay out the module’s full timing table, components, and the system configuration used to finalize the memory’s specifications. AMD is offering EXPO technology to its industry memory partners without royalties or licensing fees.

AMD EXPO technology arrives to market alongside the AMD Ryzen 7000 Series processors, with offerings from ADATA, Corsair, GeIL, G.SKILL, and Kingston. Over 15 AMD EXPO technology-enabled memory kits will be initially available, with memory speeds up to DDR5-6400.

Cyberattacks at home, how do you stop them? Greater agent responsibility crucial in war against cybersecurity risks

#BeMoreThoughtful this Christmas with a Golden Toblerone Christmas Ornament!

Have the best mobile experience with budget-friendly 5G phones from Globe!