The AirAsia Runway Ready Designer Search (AARRDS) goes regional this year with the competition expanded to include the Philippines including Indonesia, Thailand, Singapore and Malaysia to provide a platform for young aspiring designers from around the region to showcase their talents and help catapult them into the fashion industry.

This designer search, which is being held for the second time is in collaboration with the Kuala Lumpur Fashion Week Ready to Wear (KLFW RTW) team was formally launched in March 29 by Ms Aireen Omar, Chief Executive Officer of AirAsia Berhad together with Mr Andrew Tan, Founder of KLFW RTW in Kuala Lumpur. 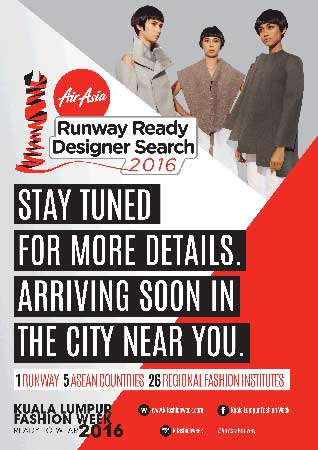 Audition round for the Philippines will be held in Manila on April 23 to discover local talents from around the country. Top 3 designers from the Philippines and other five Asean cities will compete during the Grand Finale in August on the prestigious KLFW RTW 2016 runway.

Aireen Omar, Chief Executive Officer of AirAsia Berhad said, “There is so much talent in this region, and as a truly Asean brand, we want to expand this designer search to other countries apart from Malaysia. We hope to provide all aspiring young fashion designers across Asean with a platform to empower and catapult their careers in the fashion industry. This regional designer search will be unparalleled and bring together the region’s fashion talents and industry for the first time on this scale. We look forward to see new talents this year and AirAsia is proud to be part of their journey.”

Andrew Tan, Founder of Kuala Lumpur Fashion Week Ready to Wear shared, “It is such an honour to share this important platform with AirAsia – to foster new talents and giving these designers the opportunity to present their collection and creativity on a professional runway. We are thrilled to be working with AirAsia for the second time, following last year’s success for the AirAsia Runway Ready Designer Search; and to bring this year’s competition to another level.”

Philippines AirAsia CEO Joy Cañeba and respected Filipino icons in fashion and lifestyle will be part of the panel of judges for the Manila search happening in 23 April with the venue to be announced in the airline’s social media platform soon.

This designer search is open to local or international students, 28 years of age or below, and currently studying or have graduated from fashion design schools in any of the five countries included in this search. Three (3) women’s ready-to-wear sketches inspired by Asean destinations are to be submitted with the complete registration form available at klfashionweek.com. Submission deadline is by 19 April 2016.

Throughout the audition rounds in each country, potential young designers will have to present their vision and sketches of Asean-inspired designs to the panel of judges in each city. The Top 3 finalists chosen from each country will have their collection featured at the KLFW RTW 2016 runway this August 2016 and compete for a chance to be AirAsia’s Most Promising Designer 2016. Prizes worth at least Php4M awaits the winner of this competition including a confirmed show segment to showcase his or her full collection at KLFW RTW 2017, mentorship from the KLFW RTW team; Php30,000 sponsored by FashionValet to produce a capsule collection and sold on fashionvalet.com, 150,000 AirAsia BIG Points, AirAsia or AirAsia X flights, as well as many other prizes which will be announced soon.

AirAsia is also KLFW RTW 2016’s Preferred Travel Partner and will be flying in fashion designers throughout the AirAsia Group’s extensive route network including from Singapore, India, Indonesia, China, Australia and South Korea to be featured on the KLFW RTW 2016 runway.

About the AirAsia Group

AirAsia, the leading and largest low-cost carrier in Asia, services the most extensive network with over 100 destinations. Within 14 years of operations, AirAsia has carried over 300 million guests and grown its fleet from just two aircraft to over 170. The airline is proud to be a truly Asean (Association of Southeast Asian Nations) airline with established operations based in Malaysia, Indonesia, Thailand, Philippines, India and Japan, servicing a network stretching across all Asean countries and beyond. AirAsia was named the World’s Best Low Cost Airline in the annual World Airline Survey by Skytrax for seven consecutive years from 2009 – 2015. AirAsia is the first airline globally to collaborate with INTERPOL to implement the I-Checkit system to screen the passports of all its prospective passengers against information contained in the world police body’s Stolen and Lost Travel Documents (SLTD) database.

IT Security Budgets Lower than Average in 45% of SMBs and 50% of Enterprises, Kaspersky IT Security Calculator Reveals

Time to Put the Toys Away: Kids Have Spent Less Time on Computer Games During the Pandemic

How Business Operations Thrive in a Pandemic