Celebratory fares on 3 million AirAsia seats up for grabs from as low as P300.00, all-in!

Jodie Lazuardie, a 30-year-old Art Director based in Jakarta was the lucky guest who booked the 300 millionth AirAsia seat. Jodie’s flight booking from Kuala Lumpur to Jakarta earned him a once-in-a-lifetime experience and a hefty 3 million BIG Points from AirAsia’s loyalty programme, also known as AirAsia BIG.

Upon landing in Jakarta, Jodie was treated to a Red Carpet experience which included a private pick up from the plane, fast-track immigration clearance and priority baggage handling, all the while being escorted by a group of AirAsia cabin crew.

Tony Fernandes and Alice Goh presented the 3 million BIG Points to Jodie, which can be used to redeem any flights within AirAsia’s extensive network. For instance, one return Jakarta – Singapore flight requires 13,000 points while Bali – Melbourne requires 60,000 points. The 3 million BIG Points will enable AirAsia’s 300-millionth guest to redeem hundreds of free flights to any AirAsia destination.

AirAsia reached its 100-millionth milestone in October 2010, and celebrated the 200-millionth mark three years later in September 2013. In a little less than two years, the number of guests flown across the group has grown to 300 million.

Commenting on the achievement, Tony Fernandes said, “We are delighted to be here today to welcome our 300-millionth guest. When we started AirAsia fourteen years ago, we merely had two aircraft in operation supported by 250 staff across five destinations in Malaysia. Today, we have established operations in 5 countries including Malaysia, Indonesia, Thailand, Philippines, and India with over 17,000 Allstars. We paint the sky red everyday with 199 aircraft flying to over 100 destinations in 22 countries. It took hard work and sheer determination to get to where we are today and together, we will continue to revolutionize air travel, to serve the underserved, and most importantly, to give back to the communities in which we operate.”

Datuk Kamarudin Meranun, Co-founder and Group CEO of AirAsia X said, “AirAsia has made flying affordable for millions of people and has turned millions of dreams into reality – a pledge we will continue to enshrine. Today, our dream of flying 300 million guests has come true with the support of our loyal guests. We are committed to continue putting our guests at the core of everything we do, and to consistently innovate in making their travel experience hassle-free and enjoyable. We hope to connect more places, more people, and more communities through AirAsia and AirAsia X’s low fares and unmatched route connectivity.”

To celebrate the 300 million guests milestone, AirAsia Group announced celebratory fares on 3 million seats from as low as P300.00,all-in fare and one way. Guests can fly to many exciting destinations across Asia and Australia, such as Singapore, Kuala Lumpur, Maldives, Manila, Hyderabad, Seoul, Osaka, Tokyo, Melbourne and Sydney. The promo seats are now up for grabs online at www.airasia.com until 16 August 2015 for travel period from 15 February 2016 until 31 August 2016.The celebratory fares are also available on AirAsia mobile Application that can be downloaded via iPhone and Android, and mobile sites mobile.airasia.com. 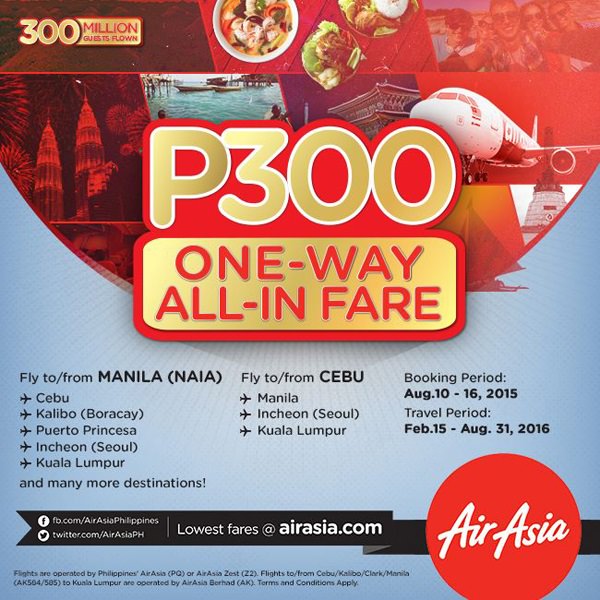 Smart pays tribute to load retailers all over PH

Order your groceries online through Pushkart.ph

The Creative Mind Behind In Style Hong Kong’s Red Packet