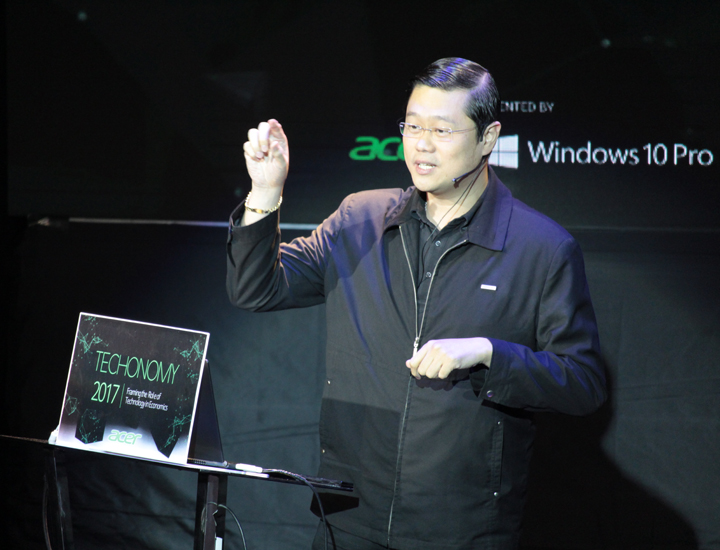 In today’s economic and business spheres, the proper adaptation of technology in enterprises determines its success. Such was the central theme in the recently concluded Techonomy Forum 2017, an event which was hosted by Acer Philippines and Microsoft last July 7, 2017, at the Maybank Theater.

With delegates from coming from the private and public sectors, the Taiwanese tech-giant led its event partners in educating attendees on the timely and properly managed shift and integration of today’s innovative technology tools and platforms in relation to business, government, and academe. An innovator and a firm believer on the essential role of technology in the way individuals and organizations operate, Acer’s hosting of the event did not come as a surprise.

“As a prime supporter and promoter of technology, Acer believes that it has become imperative for everybody to put technology in the center of business decisions, policy making, and academic development,” said Mr. Manuel Wong, Acer Philippines Managing Director, in his opening remarks.

“Numerous businesses have been successfully shaped through tech and business analytics. Marketing strategies and decisions are driven more on big data analytics more than enterprise and business-patterns predicted,” he adds.

Technology have become a central nervous system in how organizations operate in a day-to-day basis. It drives them by connecting crucial interests, stakeholders, and consumers. Due to the deep demand for improving customer experiences by business units, government agencies, and academic departments – enabling a shift towards a more customer-centric operation.

“It is an accepted truism that customers’ and stakeholders’ initial engagement with organization happen through technology, whether via mobile or web. Thus, tech units and teams in enterprises have become hyper focused in providing best possible experiences,” says Mr. Wong.

In fact, a recent global study states that 70% of consumers say technology has made it easier to interact and transact with businesses – adding that 58% agree that technology has significantly changed their expectations of how companies should interact with them. A point raised similarly by Dr. Donald Lim, in his talk on “Brand Conversations with Millenials and Gen Z”.

These studies have likewise attributed to the rise in the country’s in the Financial Technology in the country, as discussed by Mr. John Rubio – wherein he pointed out the wave of technology disruptions in the finance industry. A trend that is seen to increase the need for tech-centered financial companies and facilities.

Consequently, data-driven decision making has likewise become imperative because of the demand for technology to become central to business decisions and policy making. A point supported by Big Data advocate, Dan Meyer.

Barring these key developments, CIOs are now seen as business leaders in their abilities to recommend and direct how technology plays its role in each organization. The old model of tech managers as maintainers of the status quo has taken on a new paradigm that elevates technology as the innovation leader.

Given the need for technology’s seamless immigration into businesses, Mr. Wong challenge the event’s delegates to give their organizations an edge.

“I challenge everyone here today to champion technology in your organizations. We are living in an economy driven by the speed and genius of technology. The future of our way of work, life and event leaders are determined by our openness to embrace innovations. More than ever, it isn’t simply about tech improvements but more of the continuous rise of the digital revolution,” he said.

The Techonomy Forum 2017 is the country’s first forum on the role of technology in economics, and is hosted by Acer Philippines and Microsoft Philippines. This year’s inaugural event was supported by: The Philippine Star, Business World, PAGEONE Media, Manila Bulletin, Adobo Magazine, Mynt, Dentsu Aegis Network, Decision-Making, Analytics & Intelligence Philippines, Woohoo Learning Lab, and the Department of Information and Communication Technology.

To know more about Acer Philippines, go to www.acer.com.ph, or follow Acer via Twitter (twitter.com/acerphils) or www.Facebook.com/AcerPH.

Get ready! A new Powerpuff Girl is coming to save the day