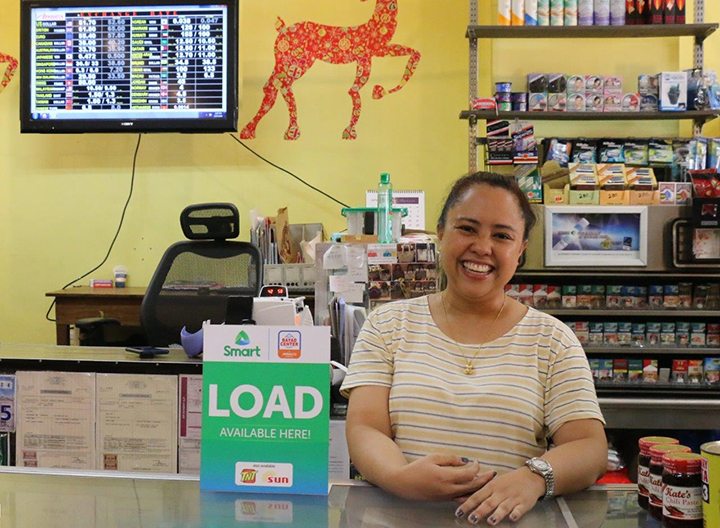 50-yr-old store keeps up with e-commerce

When Marlyn Valencia-Rivera’s family started a business in 1964, they sold only cooking oil and other sari-sari store staples in a stall at the wet market of Cauayan City, Isabela. Five years on, they were able to raise enough capital to set up a stand-alone store on busy Rizal Avenue.

Along with the move came expansion — as gleaned from the store sign, which bears her mother’s name and practically everything the store offered: Amie’s Grocery, Money Changer, Wine and RTW. Yes, the store carries all that, and more.

“We sold whatever our customers were looking for. Someone needed a hose? My mother bought a hose. Medicine? My mother ordered medicine,” says Marlyn.

She took over after her mother’s passing in 2016, continuing the store tradition of providing whatever customers needed. Not surprising then that the store was the first in the city to offer two non-general merchandise items: imported goods, and electronic load for mobile services.

“We became an e-load retailer just as cellphones became popular. My mother used to flaunt her bulky cellphone,” she fondly recalls. Selling e-load not only boosted income but led to further expansion, especially with the advent of smartphones and the internet. Now Amie’s Grocery also offers currency exchange services.

Marlyn uses the internet to monitor exchange rates. She also compares prices of their imported goods with those found in popular shopping platforms to stay competitive.

“We also go online to find new things to sell, what’s trendy, what appeals to young customers,” says the mother of two, who mentions that the store recently created a Facebook page.

Its pioneering character puts Amie’s Grocery at the forefront, with the vision of Mayor Bernardo Dy to transform Calauan into a smart city finally coming into fruition.

The local government unit recently signed an agreement with digital services provider PLDT and its wireless subsidiary Smart Communications to help transform Cauayan into a fully fiberized and Smart LTE-powered smart city that provides efficient digital services to its constituents.

PLDT is currently rolling out its fiber-powered fixed broadband network across Cauayan to serve customers with internet service speeds of up to 1Gbps. Meanwhile, Smart is upgrading its existing cell sites across the city to provide 4G or Long-Term Evolution (LTE) mobile data services. Smart is also set to rollout additional LTE sites in Cauayan in the coming months.

Cauayan’s journey toward being one of the Philippines’ first smart cities began in 2015, when the Department of Science and Technology bared a program to transform the country into a smarter nation.

“At the time, it was only Cauayan that really embraced this smart city initiative,” Dy recalls. Four years later, the city has its own citizen app, a unified electronic payment system across the town, and free Wi-Fi in its barangays to help the local government deliver its services to citizens more efficiently.

Now in business for 50 years, Amie’s Grocery has retained certain old-school values, like knowing customers personally, getting their feedback, giving the staff fair treatment (theirs has been with them since the start). These are the key factors to success.

With new technologies under the Cauayan Smart City project, entrepreneurs like her stand to reap even more success. And hopefully add 50 more years to the business, for the next generation to carry on.

At the forefront of technology with Taiwan Excellence

Buying What You Need While Staying Indoors